As we reported earlier this week, Microsoft re-released the Windows 10 October 2018 Update on Tuesday. Over the last month, Windows 10 version 1809 has been plagued by problems. So much so, Microsoft has been forced into a revaluation. In a new blog post, the company’s Michael Fortin says Redmond is placing new emphasis on quality.

Fortin points out the company is making a commitment to ensure future Windows 10 builds are quality releases. He admits Windows 10 October 2018 Update has been beset by problems. However, the executive points out this is the first issue since Microsoft started its Windows as a service model.

Discussing the decision to pause version 1809 last month, Fortin says “This is the first time in Windows 10’s “Windows as a Service” history that we have taken such an action, and as such it has naturally led to questions about the work we do to test and validate Windows quality before we begin rolling it out broadly.”

While he is correct this is the first time Microsoft has recalled an update after it release, the company did delay the launch of the April 2018 Update. And when that version did finally launch earlier this year, it was not without its problems.

Microsoft promises it will be more transparent with users over how it works to improve quality. Fortin’s blog post is the first step in this new approach. Of course, the Windows Insider Program is already in place to help Microsoft gather feedback and find problems in builds before their launch to general users.

“This combination of testing, engagement programs, feedback, telemetry, real-life insight across complex environments and close partner engagement proved to be a powerful approach that enabled us to focus our feature innovation and monthly updates to deliver improved quality.”

Clearly the Insider Program proved little help during the launch of Windows 10 October 2018 Update. Microsoft initially launched the platform on October 2 alongside new Surface devices. However, version 1809 was quickly put on ice as the manual update was deleting personal user files. Pulled yes, but not before reaching millions of users.

Either way, it was clearly a good decision to halt the roll out. Since being paused, the October 2018 Update has been plagued by problems. Users have been affected by a ZIP extraction fault, a file association problem, and an activation downgrade flaw.

Fortin says Microsoft has learned from the last month. So much so, the company is making the following pledge:

“We will up our effort to improve our ability to prevent issues and our ability to respond quickly and openly when issues do arise. We intend to leverage all the tools we have today and focus on new quality-focused innovation across product design, development, validation and delivery.” 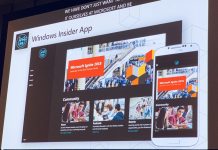