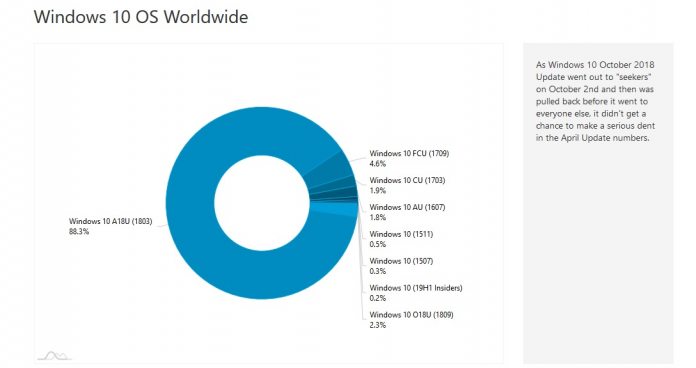 Over the last month, we charted the progress of the Windows 10 October 2018 Update. From its launch and release at the start of October, to being paused a week later, to moving through preview with fixes. We are still waiting for the full version 1809 to reach general users again.

It was suggested that Microsoft pulled Windows 10 October 2018 Update early enough and not many users had downloaded the buggy upgrade. However, a new report from AdDuplex says millions of people had already received the update.

Without doing another deep dive into all the issues that have plagued Version 1809, here is a summary I wrote yesterday:

The Windows 10 October 2018 Update has been plagued by problems, including Task Manager issues and deleting personal files through manual updates. Microsoft was forced to pull the update from release. It is recovering now through the Insider program in preview form.

Just yesterday, Microsoft fixed a ZIP extraction issue. This was thought to be the last problem and the update is once again ready for a general roll out.

However, through that month of Windows drama, there have been millions of people living with the faulty October 2018 Update. Microsoft’s mass installation base updating strategy has good and bad points. It allows hundreds of millions of people to get a new update quickly, but also means many of those will be affected by early bugs.

That’s certainly the case here. It is worth remembering Windows 10 is on around 700 million devices. With that in mind, it’s hardly a surprise the October 2018 Update affected millions before it was pulled.

AdDuplex measures the Windows 10 userbase by use of Universal Windows Platform applications. It’s not a definitive method, but it gives a good idea of the shape of the Windows 10 ecosystem. The company says 2.3% of users who used UWP apps in October had already installed the Windows 10 October 2018 Update.

If we judge that number against the amount of Windows 10 devices, it would be 16 million users. Of course, not everyone used a UWP app. Either way, it is safe to put the figure of affected devices in the millions. It is unclear how many of them would have had personal files deleted by the manual update problem.