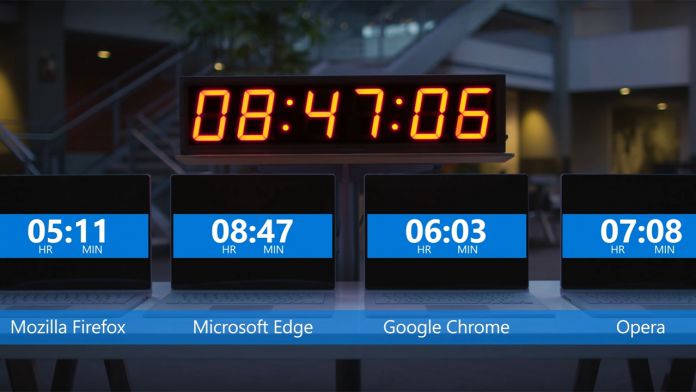 It looks like the browser wars are continuing this month, with Google announcing a 15% speed increase thanks to the use of Microsoft tech. Profile Guided Optimization has decreased page load times by 5.9 percent, and startup times by 16.8.

According to Google Software Engineer Sébastien Marchand,“This results in more optimal use of the CPU instruction cache by avoiding caching of less-used code, increasing overall performance.”

Not content to just sit by, Microsoft has now released another battery benchmark for all of the major browsers. This is just one of many in a debate between the major browsers, and is sure to brew more controversy.

There has been a long-standing rivalry between the two over battery efficiency. Microsoft’s first claim was back in June, and a month later the firm launched a battery drain notification about Chrome.

Opera disputed these claims, saying that Microsoft’s testing process was not transparent, but a third-party study later confirmed the results. However, as of Chrome build 53, Google says these issues have been resolved.

Microsoft’s latest video suggests that although battery life in Chrome is better, it’s still far from the performance of Edge. The test involves the streaming of Netflix, noting that Edge can run it in 1080p, whilst the others are in 720.

This time, Microsoft has taken on one of Opera’s major criticisms: the lack of its ‘battery saver’ option. This time round Microsoft has enabled the feature, so it’s impressive that Edge managed to win despite this.

Of course, you should take all of this with a grain of salt. Once more, the specifics of the testing have not been released. The Redmond giant itself notes that “battery life varies greatly with settings, usage and other factors.”

In addition, there’s no mention of the browsers versions used, whether it was the latest version of Chrome or a preview build of Edge. This is simply in one very specific scenario that may not translate to the majority of users.

Personally, I’m starting to get tired of all of the animosity. Battery life alone does not make a good browser. Though Microsoft’s benchmarks are impressive, backhanded marketing tactics lessen its perception as a friendly brand.

Microsoft Edge to Get PDF Reader Improvements to Compete with Chrome