There are numerous reasons why Google Chrome is probably a better browser bet than Microsoft’s Edge at the moment, but Redmond’s browser still has a few tricks up its sleeve. For a start, it is kinder on battery life than the notoriously thirsty Chrome, and Microsoft has set out to show just how much better Edge is for maintaining juice.

Google has long promised that it will fix Chrome’s battery draining capabilities, but no solution has been forthcoming so far. Microsoft, in a bid to boost Edge’s appeal and stick it to a rival, has developed two tests that measure how much power web browsers consume.

The first test gauges normal browsing behavior across a number of popular sites within a lab-controlled environment. Microsoft’s other test simply sees how long a browser will last for when streaming HD video.

Perhaps unsurprisingly, Chrome came out the worst over the browsers tested (including Opera and Firefox), managing just 4 hours and 19 minutes while streaming HD video. Edge, again unsurprisingly, secured the longest runtime with 7 hours and 22 minutes, three hours longer that Chrome and over an hour longer than nearest competitor Opera.

Microsoft says in a blog post that Edge’s success comes from a ground up approach to saving battery and using less power:

“We designed Microsoft Edge from the ground up to prioritize power efficiency and deliver more battery life, without any special battery saving mode or changes to the default settings. Our testing and data show that you can simply browse longer with Microsoft Edge than with Chrome, Firefox, or Opera on Windows 10 devices.”

The same PC and configuration (a Surface Book) were used for each browser, Microsoft says. The lab-controlled experiment put each browser through automated cycles of watching videos, opening new websites, opening tabs and scrolling through content. 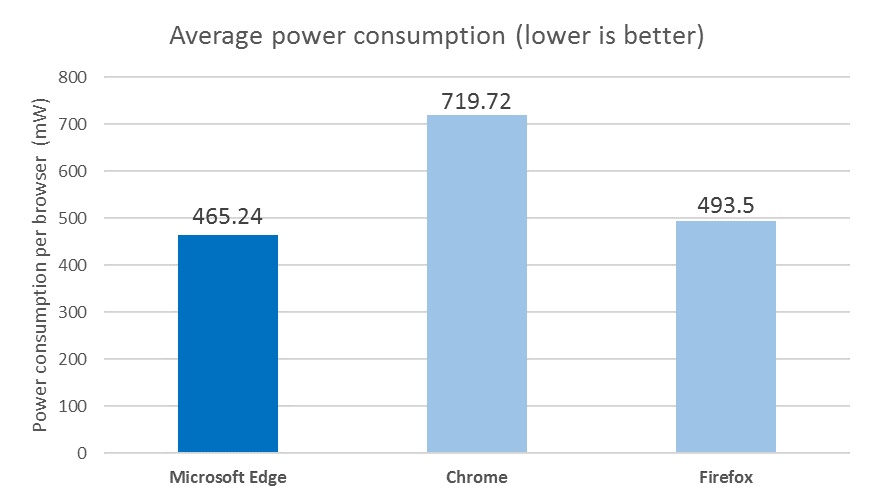 Of course, what happens in a lab may not necessarily happen in the real world. Microsoft knows this and has also provided some telemetry data about browser consumption across real-world Windows 10 devices. This data (above) shows that Edge consumes the least power, with Chrome draining battery far more aggressively.