The bell has sounded for round 3 of the web browser war. Microsoft run a test to show the Edge browser has superior power efficiency compared to Chrome, Opera, and Firefox. This test was countered by Opera, with the company conducting its own test that showed that its browser was actually the kinder to battery life.

Inevitably the only way to find a clear winner in this saga was for a third party to step in with their own test. Step in PCWorld. The outlet conducted its own test that pitted the browsers against each other in a fair scenario and showed that indeed Microsoft’s Edge is the leading browser for maintaining battery life.

Microsoft’s original test seemed to show that clearly Edge was superior. The test was actually designed to show how poor market leader Google Chrome is at managing power, but it actually pissed off Opera in the process. 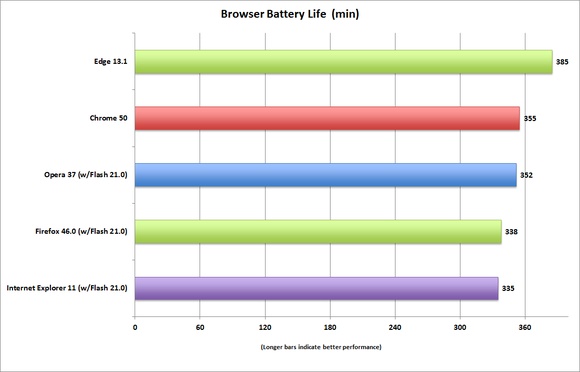 In response, Opera carried out its own test, saying Microsoft was not clear enough about the criteria of its test. The company was very clear about its settings and Opera promptly defeated Edge by a comfortable margin. However, in its honesty Opera showed that its browser was running the built-in ad-blocker while Edge was not.

We wrote last week that this give Opera an unfair advantage, and PCWorld’s test seems to show that is indeed the case. You can see in the results above that Edge was the winner, while Chrome (famed for being poor for battery life) performed well in second place. Opera came third and Mozilla’s Firefox fourth, followed by aging Internet Explorer 11 in last place.

All browsers were tested under the same conditions: EMBC BrowsingBenchmark testing on a Toshiba Radius 12 (Core i7 Skylake CPU, 8GB of RAM, an Ultra HD 4K Panel, and a 41-watt battery). You can check out the original tests from Microsoft and Opera below.

Microsoft Teams Had a Busy November with the following Features