With the rumored preview of Windows 9 ‘Threshold’ for September, we soon should also get more news about the expected touch-optimized Office for modern UI. This is what we know so far.

At Build 2014 Microsoft has already demoed an early build of the touch-optimized PowerPoint, and Microsoft Office CVP Kirk Koenigsbauer shared some details of what we can expect. Mary Jo Foley from ZDNet shared several pieces of information over the last year. And then we had one first big leak of an internal Microsoft presentation which included plenty of screen-shots of an early build of the touch enabled Office.

This is what we know so far about the touch/immersive/Modern UI Office for Windows: 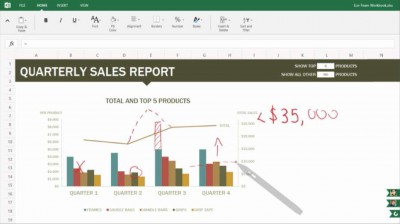 Paul Thurrott, who has spoken with Microsoft’s Michael Atalla about the specifics of Office for iPad believes that the touch-optimized, immersive versions of Word, Excel, Powerpoint etc. will be much more powerful than Office for iPad. Simple missing features like mouse- and trackpad-support and printing-support give only a hint on what is missing on the recently released Office for iPad.