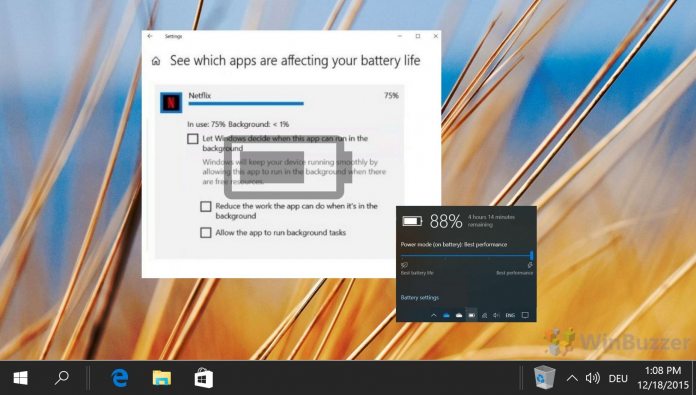 With the Windows 10 Fall Creators Update, Microsoft’s OS has added feature called Power Throttling, a way to increase the battery life of laptops by slowing down background processes.

What is Power Throttling in Windows 10?

Microsoft Power Throttling can net up to 11% more battery savings per charge with little negative impact. To do so, it leverages modern CPU throttling features to ensure that the OS is spending the lowest amount of power possible on background tasks. The idea is that the application will still get its work done, but with a smaller footprint.

However, it’s worth noting that Power Throttling is only available on Intel 6th gen and higher processors. Those with older or Ryzen processors won’t be able to make use of or disable this feature and should look elsewhere for power savings or performance gains.

With that said, we’re going to show those of you with a modern Intel processor how to monitor Windows 10 Power Throttling and turn it off/on for individual applications or the entire system.

How to Monitor Windows 10 Power Throttling with Task Manager

If you’re unsure which apps Windows 10 is throttling in the background, you can use Task Manager to get a list.

How to Disable Power Throttling in Windows 10

There are times when you’re on battery power but don’t want Windows to CPU throttle you, such as when you’re doing multiple performance-intensive tasks at once. You can disable power management in Windows 10 completely by the Power settings on the taskbar.

How to Disable Windows 10 Power Throttling via Group Policy

Alternatively, those with Windows 10 Pro or higher can use a group policy to disable power throttling for all users.

How to Disable Windows 10 Power Throttling with Registry Editor

If you’re on Windows 10 you won’t have access to the Group Policy Editor, but you can edit the Windows registry to have the same effect. First, though, make sure you read our safe registry editing guide.

If it’s just the case of a specific app that’s being targeted by laptop throttling, you can modify its settings via the regular Windows settings UI.