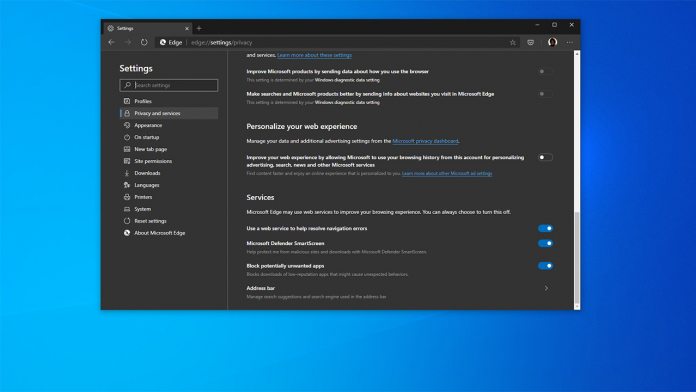 A new feature in the Microsoft Edge beta lets users automatically block potentially unwanted apps. A toggle in the settings menu lets them bring some of the power of Windows Defender enterprise to their browser.

With the settings enabled, Edge will check downloads against a list of Potentially Unwanted Applications (PUAs), which include toolbars and adware. It essentially foes further than SmartScreen or Google’s Safe Browsing, providing users who want it with some extra security.

You can expect the feature to roll out the stable Edge build as soon as it’s been tested by Insiders. However, whether or not Microsoft will make this the default setting at some point is unclear. Without, many users won’t even realize the option exists, and those likely to fall into the crapware trap are most likely to fall into that camp.

Even so, this is a strong upgrade for Edge and another feature it has built on top of the Chromium engine to compete with Google. It’ll be interesting to see how competitors respond, though Firefox has had a similar feature as far back as version 48 in 2016.

To offer further value, Microsoft is looking at ways it can support PWAs, a.k.a. Progressive Web Apps. It already lets users create an app out of any webpage, and recent GitHub postings suggest it will soon build on their colored title bars with customizable ones and the ability to launch apps at startup.