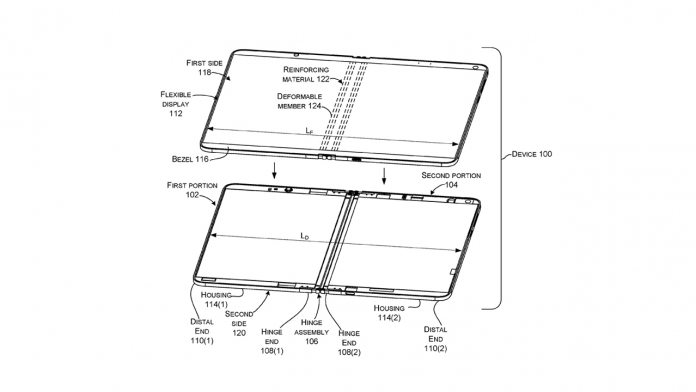 A newly-published Microsoft patent proposes yet another design for a dual-screen device. Following several similar entries, this one is simply named ‘Hinged Device’, and was filed in March. Rather than two separate screens, this one details a flexible screen.

Microsoft says the screen would attach to the top and bottom of the device. its gine would be “rotationally secure”, and change the length of the device underneath while rotating to reduce stress on the screen.

It further dives into how the hinge would work mechanically, describing its use of a reinforcing material, corrugated pattern, gears, cords, and bridge structures. Needless to say, this is a fairly complex piece of engineering and we don’t fully understand the details. With the sheer number of related patents, though, it seems a good bet Microsoft is hard at work on something. The volume of patents also makes it difficult to pin down exactly what such a device would look like. Previous reports peg the company’s Centaurus foldable as having two separate screens, rather than a single flexible one.

Due to Microsoft’s strict security, we’re unlikely to see images of the device until its official announcement. Thankfully, with the tech giant hinting at big things for its October 2nd Surface event, that may not be far away.

Previous hinge mechanisms have included a 360 magnetic design, floating connection, and phone format. If a device does make it to market, which is far from guaranteed, it could utilize any of these designs, or none of them.