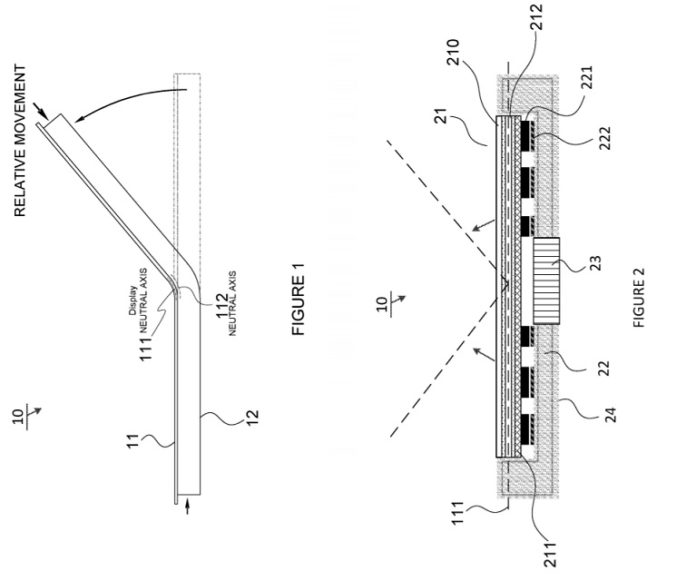 Another week and another hint that Microsoft is working on a folding screen device. The latest Microsoft Patent describes a concept for bendable display technology. Whether we will one day get a Surface Phone or an Andromeda OS-backed laptop remains to be seen. What is clear is Microsoft is investing in research and development around the folding screens.

The latest but of R&D is a new Microsoft Patent discovered by Windows Latest but published last year. It describes a laptop or any small device that features a flexible display rack. This is a folding screen implementation that also includes a body that serves as a chassis.

Microsoft’s patent points to the chassis underpinning a display stack with an active layer and a supporting layer. The company says the supporting layer could be rigid and made of metal but include a section that provides the folding capability to the screen.

A hinge will likely be used to facilitate that bending function, or Microsoft also discusses an elastic component such as rubber. Microsoft will use the supporting layer to fasten the body to create a “movable connection”. This could be achieved through a physical mechanism, through magnets, or both.

Of course, the main idea behind having such a device is that the screen can fold. Creating and maintaining that flexibility while allowing the display to remain on the body is important. Microsoft’s Patent works to allow the screen to fold multiple times (hundreds of thousands through a device lifetime) without causing deformation.

It is interesting that Microsoft calls the connection method as “floating” between the screen and body, also protecting structural integrity through shock absorption.