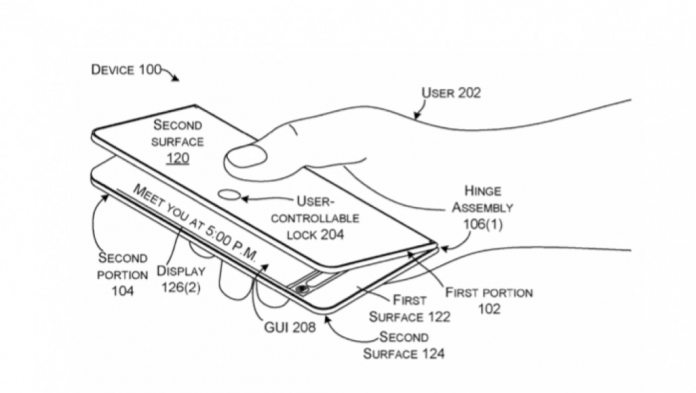 While Microsoft is reported to have nixed its Surface Phone in favor of a dual-screened laptop powered by Andromeda, the company seems to be pressing ahead with folding screen technology. We have seen various Microsoft patent tech that highlights folding screen systems, and now there is another.

We have often believed the folding screen hinged devices Microsoft has worked on have been for Surface Phone. Perhaps they still are. The latest Microsoft patent shows a new locking system. In the notes, Microsoft says the solution creates a locking mechanism for a dual-screen smartphone.

Called the user-controllable lock. In Microsoft patent notes how a single finger touch would “pop-up” to instantly unlock the two attached screens.

Microsoft discusses a pop-up feature that works with a spring and hinge mechanism when it is unlocked. The goal is for users to be able to open the device with a single hand. Closing the two screens together would enact the lock automatically.

As mentioned, it has been reported that Microsoft had killed its Surface Phone. However, rumors persist, and this Microsoft patent does little to stop that speculation. We have seen the larger folding laptop device called Centaurus, but the device in this patent drawing is definitely mobile.

On a smartphone, this would essentially mean a full-blown PC in your hands. That’s what makes the concept of a dual-screen Surface Phone so appealing.

We have been excited about a smartphone that has the full capabilities of a laptop and with some nifty hardware innovations through folding dual-screens.