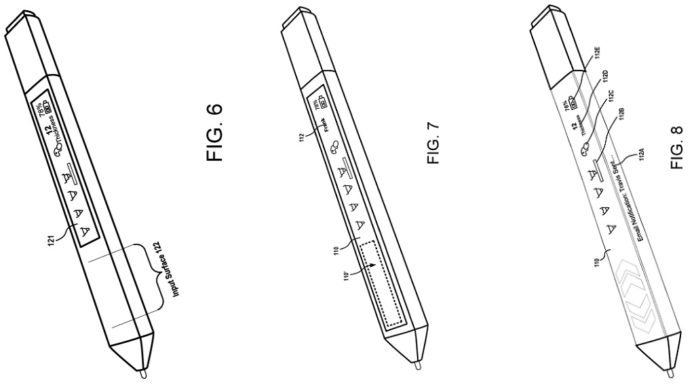 Apple’s Touch Bar, which the company uses on its MacBook products, is the sort of gee whiz implement that looks cool but is not functional. While it appealed as a concept, the Touch Bar was quickly rejected. Perhaps that makes it a surprise that Microsoft is developing a similar idea for its Surface Pen.

A Microsoft patent (spotted by WindowsLatest) showcases a digital pen that will interact with a virtual strip along its length. Admittedly, not ever long screen has to be a Touch Bar comparison, and perhaps Microsoft can make its tool more functional. Titled “Dynamic Interaction Adaptation of a Digital Inking Device”, the patent highlights further development of the Surface Pen.

The patent describes a Surface Pen with a digital display that shows device status, UI controls, notifications, and more. Microsoft seems to be working on this being something of an individual computing device.

“In this example, while operating in the second interaction model, the digital inking device only displays an email notification and a portion of a battery status indicator. This example is provided for illustrative purposes and is not to be construed as limiting. Any type of notification can be displayed when the pen 100is operating with either interaction model,” Microsoft explains. 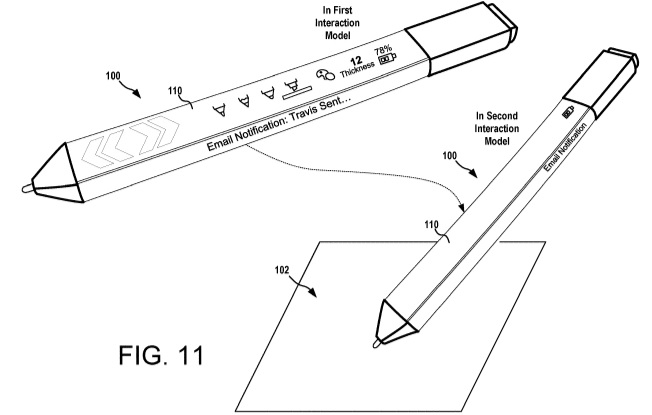 As is usually the case with patents, there are no guarantees this product will ever be fully developed. Microsoft may be covering its bases or even saving this technology for the future. Either way, it will be an interesting addition if it does arrive on a future Surface device.

Microsoft certainly seems to want to give the Surface Pen more functionality. Over the last year, the company has published several pen-related patents. Earlier this month, we reported on a patent that described a stylus device that also works as an earpiece.

Images show a Surface Pen-like stylus that can be bent to wrap around a user’s ear. An earpiece can then be docked at the eraser of the pen and charged when connected to the stylus.

Microsoft is also working on a pen that will work as a full mouse replacement. Titled “MULTI-FUNCTIONAL STYLUS”, the patent describes how new implementations can boost the functionality of a stylus. The tech detailed in the filing would likely be added to a new Surface Pen, possibly for the future Surface Pro 7.