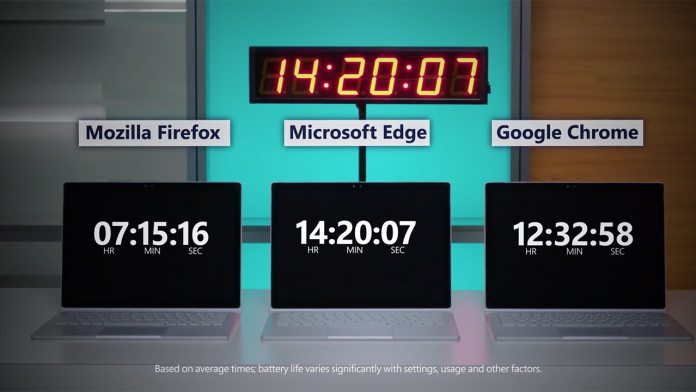 Microsoft Edge’s latest battery test isn’t as impressive as previous years. The company pits the three major browsers against each other after each Windows 10 update in a bid to promote its prowess.

It’s clear that Google is making significant headway via backend changes, while Edge still fails to support many features and extensions. For users, it’s no longer clear if the battery advantages of the browser are worth the trade-off.

What is clear is that Firefox is trailing far behind. In comparison, Mozilla’s offering managed 7 hours 15, which almost half that of Microsoft Edge. If you’re using a laptop, it definitely seems worth using another browser to stream video.

However, it’s worth noting that Microsoft’s tests may not be entirely accurate. Previous independent tests have painted an even closer picture, with Chrome just ahead of Edge when it comes to consistency and video life.

It’s possible the tests are significantly affected by hardware, as Microsoft always uses its first-party Surface devices. Results may vary depending on the laptop you use, the age of your PC, or even the site you stream from.

Without a large-scale test across different hardware, streaming sites, and tasks, it’s impossible to say which of the browsers comes out on top. It’s also not a mistake that Opera, which is heavily focused on battery life, isn’t present this time around.

Basically, you can’t put a lot of credence in these tests, but when Microsoft’s own metrics show Chrome is closing the gaps, it’s clear there’s not much in it.