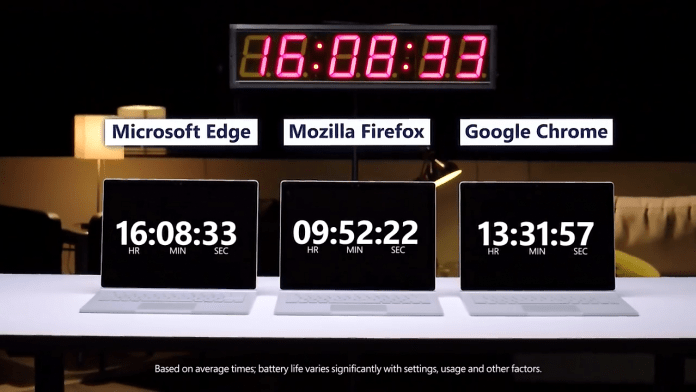 Microsoft has long been touting its browser as the best for battery life. It began its aggressive advertising campaign in April 2016, with Opera striking back in June with contradictory results.

Since then, Microsoft has continued to push Edge’s battery saving capabilities, even adding OS-level warnings when users open Chrome. The results were disputed once more in June 2017 with an independent test.

Microsoft’s latest video attempts to put those concerns to rest. Like previous adverts, it shows three identical devices streaming the same full-screen HTML 5 video until they fail. This time, it utilizes improvements in the Windows 10 Fall Creators Update to edge ahead once more.

This time, Opera does not feature in the video, but Edge lasted 63% longer than Firefox and 19% longer than Chrome. A previous test in April set it as 77% and 35% longer, so it’s clear that both rival browsers are gaining.

However, the new test puts Edge at over 16 hours battery life on a Surface Book, which is a significant improvement over the previous 12 hours. It’s clear Microsoft is making gains, but its less clear how much users care.

Despite its widely touted battery life increases, Microsoft Edge is still struggling to keep users away from rival browsers. The latest NetApplications report puts IE and Edge market share at 16.97% at the end of 2017, 1% less than it began the year with.

As expected, Google Chrome is still the giant, holding a huge 60.57% across desktop and laptop PCs. Firefox sits at around 11%. Though it’s possible Microsoft’s battery life tests have an impact, it doesn’t seem to be a major one.

However, recent comparisons of speed and security could have a bigger influence. Microsoft claims Edge is now up to 48% faster than Chrome and blocks 18% more phishing attempts.

Ultimately, though Edge is still lacking in support for several features and extensions. Unfortunately, adding some of those can result in reduced performance and battery life, so it’s a slippery slope.