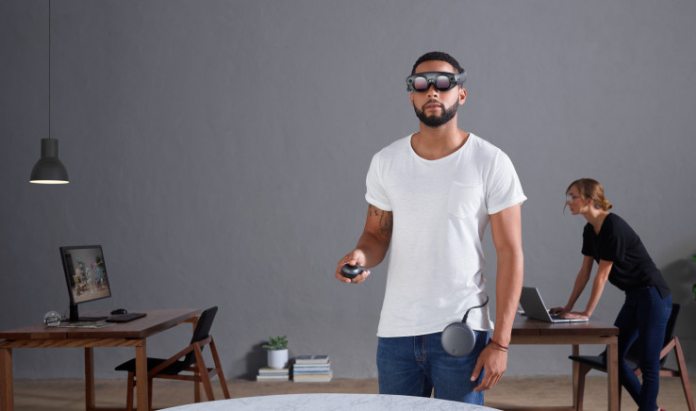 Microsoft largely has the augmented reality market to itself with HoloLens. Tech rivals have largely explored virtual reality, while Microsoft has tied up many OEMs to Windows Mixed Reality. However, HoloLens is not yet consumer ready and there is a new player in town. Magic Leap has unveiled its “creator edition” augmented reality system, the Lightwear.

To show off the Magic Leap Lightwear, the company invited Rolling Stone to try out the device. The demo included a virtual comic book floating in the augmented space, characters that react to eye contact, and live performances.

The device is much more streamlined than HoloLens. It’s is like an oversized goggle set that pairs with a puck-sized external computer called a Lightpack. Magic Leap completes the package with a handheld controller which can accept “multiple input modes including voice, gesture, head pose and eye tracking.”

In talking up the device, Magic Leap also highlights the general benefits of augmented reality. Unlike VR, which works entirely in a virtual space, AR places virtual objects layered onto a real-world environment. This means users can interact with virtual objects in a real space. In terms of the Lightwear, it will:

“Place a virtual TV on the wall over your fireplace and when you return later, the TV will be right where you left it.”

The company says it will release an SDK for developers early in 2018, with the hardware coming later that year.

Streamlining the headset means having to carry around the Lightpack. Fortunately, it is small enough to not be a problem and will clip to a belt or bag. The computing power of the Magic Leap One has been compared to the MacBook Pro of an Alienware gaming laptop.

While smaller and not handling the bulk of processing, the goggles will have their own mini-computer. This will power world detection and AI capabilities. The headset also gets four microphones, speakers, and six cameras.

There are no words on pricing, but we guess Magic Leap will undercut Microsoft’s $3,000 HoloLens significantly. Interestingly, the company also says the One has a much better field of view than Redmond’s device.