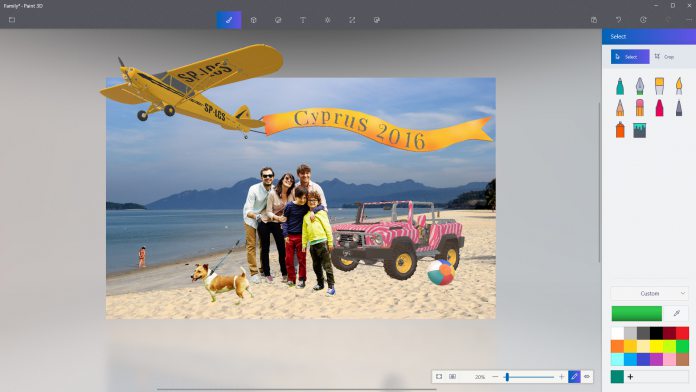 Paint 3D is an integral part of Windows 10 Creators Update, and was a focal point of the platform’s introduction last year. While some Windows users are awaiting the Creators Update, Microsoft is busy adding more features to one of its star attractions.

Microsoft has announced an update for the Paint 3D app. The release brings several important new abilities to the service. Arguably the most important is enhancements to the magic select tool. Additionally, Microsoft has added new Line and Curve capabilities and support for the GLB file standard.

Paint 3D is a modernization of Microsoft’s classic Paint app. It is a 3D creation tool for Windows 10 that allows users to easily create and edit 3D models. These models can then be used as integrations for 3D printing and mixed reality through HoloLens and other headsets.

The new update brings a significant improvement to the magic select feature. The tool already allows users to remove an image background. This can be used for the creation of stickers and use on other 3D models. Through the new release, selections (the part left after cropping) can be placed directly into other scenes.

Microsoft says this is more intuitive as objects previously had to be moved off the canvas to do this.

Introduction of Line and Curve

Focusing on Line and Curve abilities, the company has finally added the features to Paint 3D. Microsoft says these staples of the traditional Paint experience have been much-requested by 3D users:

“The Line tool gives you the ability to control the thickness and opacity and the Curve tool has one, two, and three inflection point controls that allow for the creation of lots of interesting objects. When you use these tools across 3D shapes, the line and curve tools act just like other stickers, which means that they can be seamlessly applied to both the canvas and 3D objects.”

This is achieved by “outputting only one container for all assets, minimizing the file size and the ability to use the files across other programs as a universal format.”