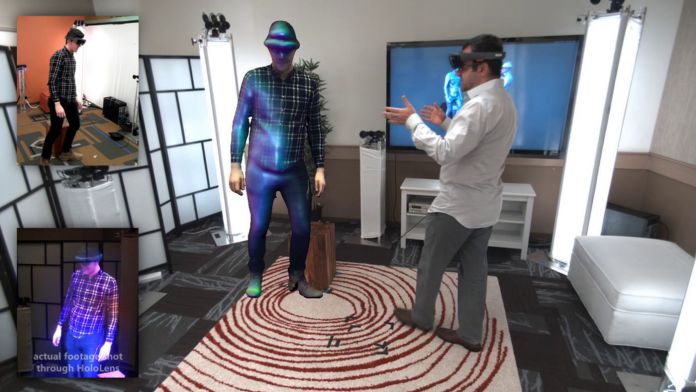 By using an innovative approach to compression, the bandwidth required by Holoportation has been reduced to 30-50 Mbps, allowing the use of the technology in a moving vehicle. However, the vehicle needs to be within wi-fi range for it to work.

Microsoft states the use of cellular data will start soon. It will be interesting to see how the company approaches this because per today’s LTE standards.

The company also emphasizes that this technology is for use without the interaction with the driver and only by a passenger in the back seat of a moving vehicle.

A Holoportation system requires at least two cameras capable of capturing depth information to create a 3D representation of an object. Naturally, the quality of the 3D model rises with the number of cameras.

A head mounted display like Hololens is needed in order to view the other participants in the Holoportation system. With it, you can see, hear, and interact with the holoported counterparts.

Such a mobile solution greatly increases the potential applications of real-time 3D capture and transmission. Still, there are some challenges such as changing lighting and background, vibration and reducing the compute footprint to fit in a vehicle.

Holoportation is a new type of 3D capture technology that uses multiple 3D cameras that generate high-quality 3D models of people. These models can be reconstructed, compressed and transmitted anywhere in the world in real time.

In a combination with an augmented reality headset such as HoloLens, this technology allows users to see, hear, and interact with remote participants in 3D as if they are actually present in the same physical space.

Real-time communication and interaction with remote users become rather natural as face-to-face communication. The technology also allows to make a recording and use it for playback later.

Holoportation was first presented in March this year. Microsoft has long been critical of the fact that virtual reality blocks the users off from their actual environment.

However, the company explained last month that it was opening up the VR market. At its Windows 10 Creators Update event, Microsoft said it is making VR accessible. On Windows 10, the company will attempt to create a VR experience that really interacts with the surroundings.