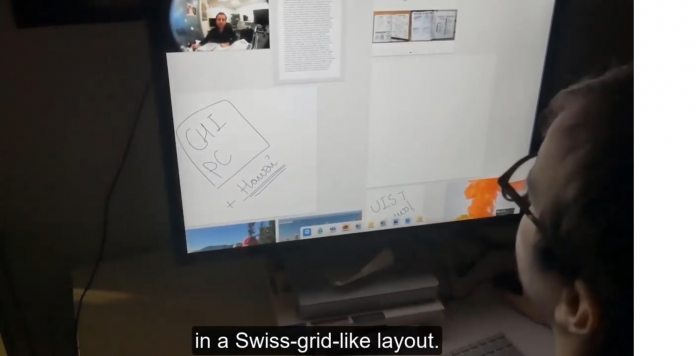 Microsoft Research has developed a new technology that helps applications orient exactly to the tilt of a screen, or the hinge angle on a laptop or folding smartphone. While the tech could have wider implications, it seems Microsoft’s initial goal is for it to work on the Surface Studio.

Apps reacting to device accelerometers and automatically switching screen modes between landscape and portrait is hardly a new thing. However, Microsoft Research has made a breakthrough allowing orientation based on tilts.

The Surface Studio is a good test device because it can be sat in various guises and angles. Any way the display is angled, (low, high, or another gradient), there are limitations. One angle may be good for a specific task but not for another. For example, lying flat may be good for drawing, but less so for typing.

“Because what is appropriate also depends on the application and task, we explore a range of app-specific transitions between reading vs. writing (annotation), public vs. personal, shared person-space vs. task-space, and other nuances of input and feedback, contingent on display angle. Continuous responses provide interactive transitions tailored to each use-case.”

In terms of drawing apps, Microsoft describes how switching between pen-optimized and mouse-optimized can be achieved. Apps will be able to orient in continual response to different angles of the display.

Microsoft’s video to accompany the announcement shows how work scenarios will look through the new display angles.

It is unclear Microsoft’s long-term goal with the technology. However, many of the company’s devices are heavily reliant on their screen tech. Hinges have become a fundamental part of Surface products, including the new Surface Duo smartphone with its two separate displays.

There’s no one way to orient a Surface display, so this tech could prove useful in the future. You can read more about it at Microsoft Research here.