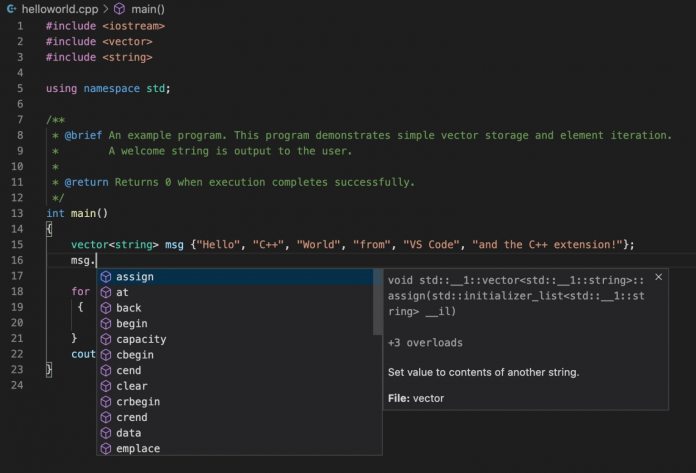 Microsoft this week announced Visual Studio Code users can now tap into the company’s C++ extension. Specifically, the extension is leaving preview and arriving to VS Code users as a non-beta release.

According to Microsoft, the C++ extension delivers numerous tools to Visual Studio Code, allowing for users to get more work done:

“The C++ extension brings a rich set of productivity features to VS Code for C++ developers, including IntelliSense smart code completion, debugging, refactoring, code navigation, and more,” Microsoft’s Julia Reid says. “On top of that, these features are adaptable to various platforms, architectures, and compilers, enabling all your cross-compiling and remote development scenarios.”

Visual Studio Code is Microsoft’s open-source and cross-platform code editor that is focuses on providing lightweight editing. Users can tap into the service across Windows, macOS, and Linux. What makes VS Code a popular choice is a vast library of extensions available to developers for mobile and web apps.

C++ is perhaps one of the most important additions to the service. Microsoft says the extension is available for VS Code 1.0. Furthermore, there is also a C++ Extension Pack that provides C/C++ support, C/C++ themes, CMake, CMake Tools, the Remote Development Extension Pack, GitHub Pull Requests and Issues, Visual Studio Codespaces, the LiveShare Extension Pack, the Doxygen Documentation Generator, and improved C++ syntax support.

It’s good that Microsoft continues to support the ever-popular C++ developer community. Despite the programming language aging, it remains a popular choice for many app creators. Back last year, we reported on Microsoft’s interest in adopting RUST as a replacement for C++. However, it seems interest in RUST won’t come at the expense of supporting C++.