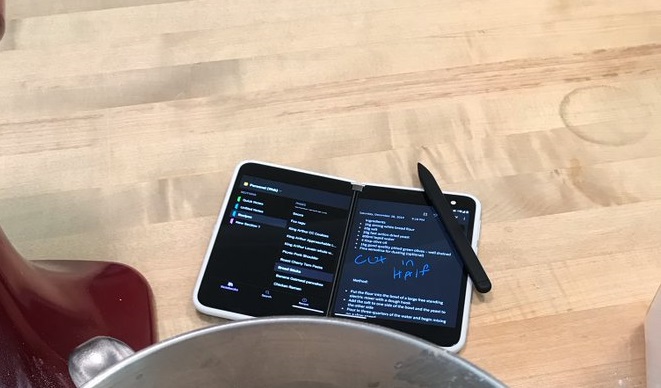 Microsoft is preparing to launch its Surface Duo Android smartphone, with most pointers suggesting an August debut for the handset. It seems the new device will be shipping with some interesting new accessories. One of those will a Surface Pen that is designed to work with the Duo.

Make no mistake, Microsoft higher-ups would not be offering these leaks if the Duo was not imminent. It is also worth noting Shaw’s Twitter image not only showed a Surface Pen, but also the bumper case.

One question raised by the photos was what Surface Pen will ship with the smartphone. While it is possible this is a new Pen variant, it’s more likely it is the Surface Slim Pen. This is the version that ships with Microsoft Surface Pro X ARM-based device.

If you’re unfamiliar with the Surface Slim Pen, it has wireless charging and the N-trig technology found on the full “stylus”. Considering Microsoft will certainly push the Surface Duo as an enterprise-first device, Surface Pen support is an important addition.

Now all that’s left is to wait for Microsoft’s launch. You may remember the company was originally planning to launch the Duo later in the fall. It was going to arrive alongside the Surface Neo, which has since been postponed.

However, it has been widely reported Microsoft has moved the launch of the Surface Duo forward to August. This seems to be because the company wanted to arrive around the same time as the Samsung Galaxy Fold 2, which will be the Duo’s main competitor.

Interestingly, Samsung has reportedly delayed the Galaxy Fold 2. That means the handset is unlikely to arrive at the company’s Unpacked 2020 event on August 5. Still, that change does not seem to have altered Microsoft’s own plans. As such, we expect the Surface Duo to be launched soon.