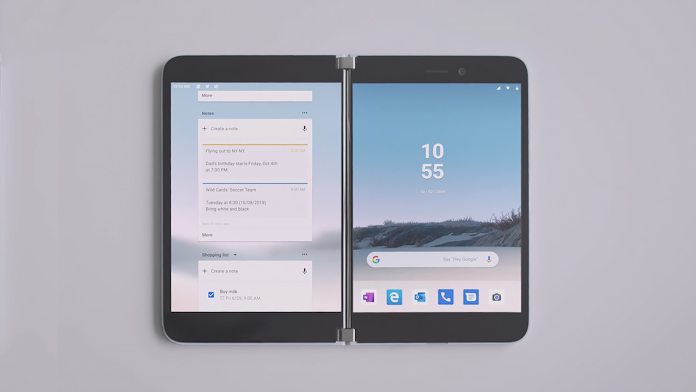 Rumours are mounting surrounding the launch of Microsoft’s Surface Duo Android smartphone. Most of the speculation suggests the handset will launch in August. Lending credibility to these rumors, Microsoft has updated its Your Phone app to support the Duo. To whet the appetite, Microsoft product chief Panos Panay has posted a photo showing the device.

Let’s start with the Your Phone update for Android and Windows 10. As you may know, this is an application that allows users to mirror their Android or iOS smartphone to Windows PC and use it on the desktop.

Your Phone is more advanced on Android and as the Surface Duo is based on Android’s platform, the app will play a big part in Microsoft’s push for business users. According to Zac Bowden, Your Phone is now updated to support the Duo.

This suggests the smartphone is gearing up for a release.

Looks like Your Phone already has the assets to differentiate between normal Android phones and Surface Duo pic.twitter.com/BBnKenOF1E

The second hint the Duo is arriving soon is more of a classic Panos Panay tease. Microsoft’s Chief Product Officer Panay is known for his exuberance and for leaking information about upcoming products.

In his latest move, he Instagram’d an image of him with his children on Father’s Day. In the image there is very clearly a Surface Duo. However, this does not really means the handset will launch soon. Microsoft executives already has the handset and have had it for some time.

In fact, back in April, Panay posted another image showing the Duo in his house.

While Microsoft introduced the Android-running Surface Duo last October, the company has been tight lipped on a specific launch. In fact, Redmond has stuck to a “late 2020” launch Windows since that reveal. Recent leaks suggest the smartphone could land as early as this summer, with August a mooted release time.

Reasoning behind this launch timeframe centers on Microsoft apparently wanting to launch the Duo before Samsung rolls out its Galaxy Fold 2.