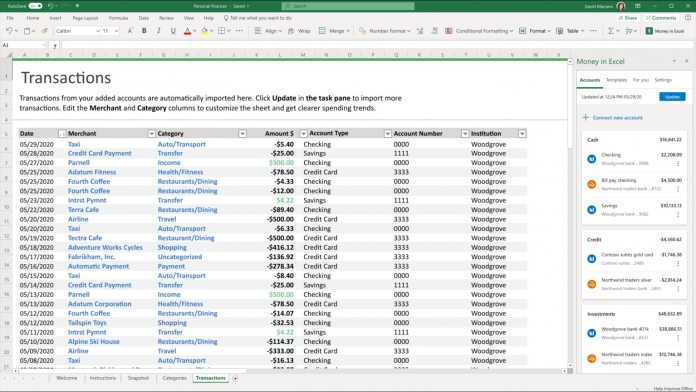 Back in March, Microsoft announced Microsoft 365 Personal and Microsoft 365 Family, the consumer version of its product. For subscribers using the Microsoft Excel Office app, there are a couple of new features in the pipeline.

According to Microsoft, a new Money in Excel tool is now available in the United States. Furthermore, the Stock History feature we discussed last week will be available later this week.

Let’s start with Money in Excel, a feature that provides access to financial information that is displayed in a chart or spreadsheet. When a user sets up the tool, they can receive “bank, credit card, investment and loan accounts.”

Designed to help people better track their finances, the Money feature provides an overview of monthly spending. Excel will send notifications about “increases in your subscription fees, changes in bank and overdraft charges, or any big purchases that were posted during the month.”

Users can also add their own custom spending fields into spreadsheets. As mentioned, Money is limited to the United States for the time being. Microsoft says the feature will expand globally but has not put a date on that expansion.

Now let’s move to Stock History, which we reported on earlier this month and is now getting a beta release. STOCKHISTORY taps into the Stocks data type in Microsoft Excel and also the dynamic arrays ability that came to the app last year. As the name suggests, STOCKHISTORY will compile stock values from different dates and present them all in Excel.

Dynamic arrays is an important part of the new tool. The feature allows formulas to output values across cells as a list. STOCKHISTORY leverages a recent collaboration announced by Microsoft.

Specifically, Microsoft has been working on expanding the stock capabilities of Excel. Last year, the company announced a partnership with Refinitiv and Nasdaq. Under the partnership, those companies will bring real-time stocks to the Office app.