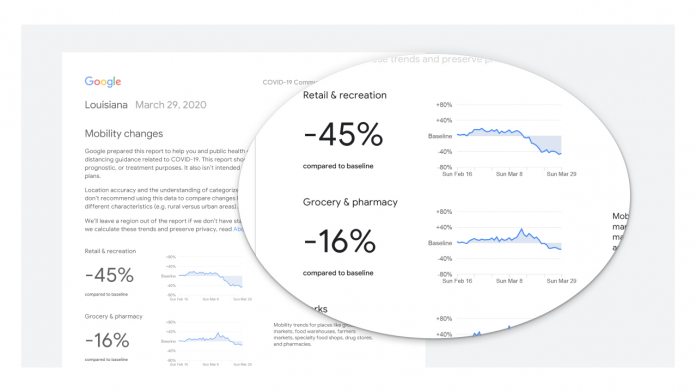 If you’re leaving the house, you probably have that phone. On that phone, there’s a good bet you have Google Maps, Google Assistant, and may have “opted into” location tracking for full functionality. Alphabet Inc. is taking advantage of the huge amount of data it collects to show the effects of social distancing and lockdowns to governments and citizens.

The reports, which are aggregated and have no identifying data, will be updated regularly and track the change in user’s mobility over time. Data is provided for 131 countries and regions and makes comparisons to a baseline of historical data for the time period.

New York is one of the hardest-hit regions, and there’s a noticeable downward trend across various sectors. There has been a 62% drop in retail and recreation visits, for example, and a 32% fall in grocery and pharmacy visits. Park visits fell 47%, transit station activity 68%, and workplaces 46%.

Such drops are encouraging when it comes to limiting the spread of the virus. The United Kingdom has been in a state of lockdown since March 23 and its metrics show an even steeper change. With most shops told to close, retail and recreation visits have dropped by 85%. Grocery and pharmacy shopping has fallen 45%, and began their decline even before the lockdown was in place. Public transport hubs, meanwhile, have seen 75% less activity compared to their baseline, and 55% are no longer traveling to work.

Is a Unified Response Necessary?

What’s clear from Google’s data is that countries who have trusted in their citizen’s sense of responsibility haven’t seen anywhere near the same decline. Sweden, which has been criticized for its lack of stricter measures so far, has seen a dip of 24% in retail and recreation. Concerningly, though, visits to parks, beaches, and public gardens have risen by 43% compared to the baseline.

Such data could be invaluable to governments and healthcare officials, who would struggle to get it alone. Google is particularly interested in the data’s ability to aid less obvious questions, such as opening more transit routes if many citizens are still catching the train to avoid group spread.

The US as a whole currently has the most infected people of any country, but its mobility changes from Google don’t quite reflect that, with various states taking different steps:

The bigger question is what impact these drops will have on real-world infection and death rates. With gaps in testing, it’s difficult to say concretely, and even Google can’t help there. It can take up to 14 days for Covid-19 symptoms to surface, and many countries haven’t had strict measures for that long. Even so, this data could help governments see if citizens are getting tired of restrictions, the effects of warmer weather, and if further measures need to be taken.