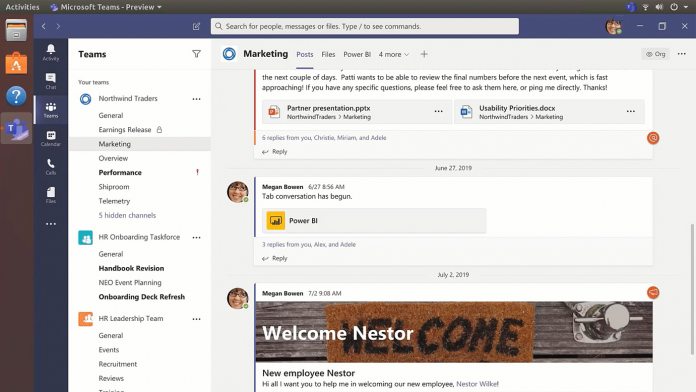 After much user demand, Microsoft Teams has finally landed on Linux. A preview version of the app is available in .deb and .rpm today and looks very similar to its Windows 10 variant.

Microsoft said it’s been working with customers for several months to perfect its app, which is the first of the Office suite to debut on the OS. We heard the first rumors of an Linux app in August, so that makes sense. Even in preview, it’ll support all of Teams’ core capabilities, bringing together workplace chat, document collaboration, and video calling.

“Most of our customers have devices running on a variety of different platforms such as Windows 10, Linux and others. We are committed to supporting mixed environments across our cloud and productivity offerings, and with this announcement, we are pleased to extend the Teams experience to Linux users,” said Marissa Salzahar, product marketing manager, Microsoft Teams. “It’s also an exciting opportunity for developers who have built apps for Teams to be able to grow their reach to this new set of users.”

As the app is in preview, it’s likely to have bugs and some annoyances, but Microsoft will be building on that in time. Linux users can utilize the web version if that proves too much, but they’ll probably be losing out on some performance and OS-level features.

Either way, the release of Teams for Linux makes Microsoft even more competitive with its main rival, Slack, which has supported the platform for some time. Slack CEO Stewart Butterfield has been increasingly critical of the tech giant’s user experience in recent times, but that hasn’t stopped Teams growing to 20 million daily active users.

An official Linux version will only win more users over, provided it’s well-implemented. Now we just have to hope that Microsoft will see the value and port the rest of the Office suite.