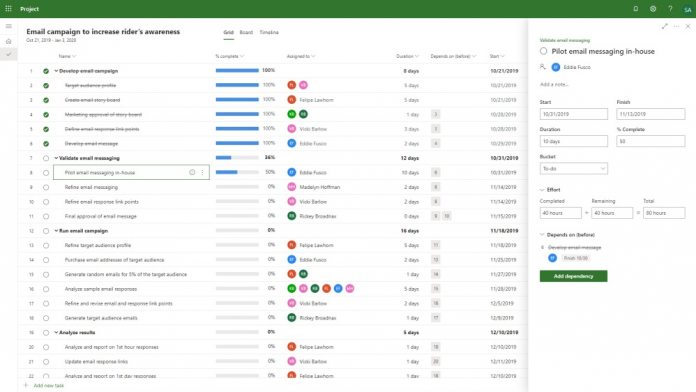 Microsoft has sent out an update for its Microsoft Project solution. In fact, this is a complete overhaul for the project management software with a new design and features. Microsoft says the focus of the transformation is to allow teams to have a more efficient collaboration environment for projects.

You may not have heard of Microsoft Project. It is admittedly a lesser known tool compared to Redmond’s other enterprise-centric offerings. However, it is one of the oldest services on Microsoft’s roster having made its debut way back when Windows launched three decades ago.

Of course, a lot has happened to Microsoft Project since then. That said, the focus of the tool has remained the same, to allow teams to assign tasks, schedule, manage budgets, chart progress, and more.

As you may expect from Microsoft in the 2010s, Project is now a cloud-focused solution. The company promised a new version of the solution and has been previewing new features recently. Now, the new Microsoft Project experience is moving to general availability.

Front and center of the overhaul is a new user interface. Microsoft says the redesigned UI allows users to create tasks, timeline charts, boards, and add new members more easily. Integrations also play an important part, such as with Office 365 and Microsoft Teams.

The latter is both an important and obvious inclusion in Microsoft Project. Over 500,000 organizations now use Teams and the workplace chat tool has over 13 million daily active users.

Power BI is another integration in the new Project experience. By leveraging the data analytics service users can generate interactive dashboard highlighting specific areas of a project. With a new feature called Roadmap, users can see a wider picture of all their projects.