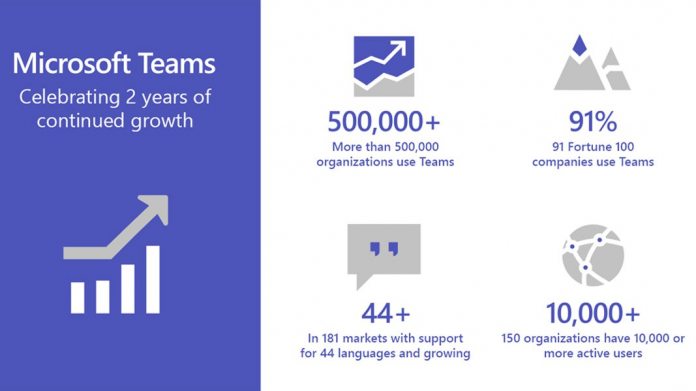 Microsoft Teams was launched two years ago and became an instant competitor to Slack. So much so, Slack instantly took out an ad in the New York Times saying it was ready to fight Microsoft for workplace collaboration supremacy. However, it seems Microsoft is having the upper hand.

Slack’s market share has remain relatively static and adoption rates are decreasing. At the same time, Teams is increasing its share and has higher adoption rates.

One major contributor to Microsoft Teams’ success was it is included within Office 365. Tens of millions of users subscribe to Office 365 and each of them received Teams when it launched. Microsoft was debuting a service to an existing install base.

Since then, Teams has expanded to a free version, but its success has been built on the cloud with Office 365.

Microsoft has also taken an aggressive approach against Slack as it aims to position Teams atop the market. Last month we reported on the company’s decision to ban some aspects of Slack from being used internally.

Microsoft suggests the company has security concerns. Specifically, Redmond says it has concerns surrounding Slack Free and Slack Plus:

“Slack Free, Slack Standard and Slack Plus versions do not provide required controls to properly protect Microsoft Intellectual Property (IP). Existing users of these solutions should migrate chat history and files related to Microsoft business to Microsoft Teams, which offers the same features and integrated Office 365 apps, calling and meeting functionality. Learn more about the additional features that Teams can provide your workgroup. Slack Enterprise Grid version complies with Microsoft security requirements; however, we encourage use of Microsoft Teams rather than a competitive software.”