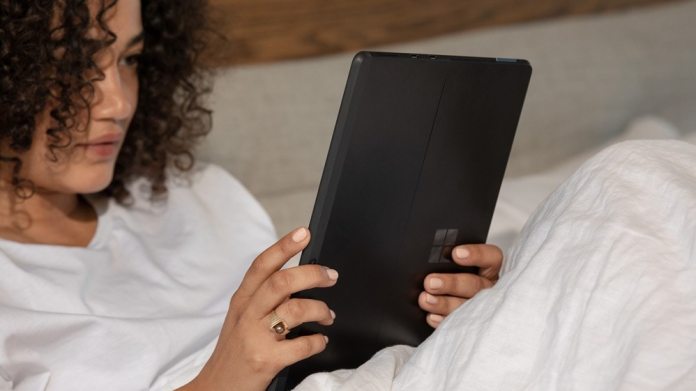 Somewhat expectedly, Microsoft has confirmed the Surface Pro X‘s gaze correction tech won’t debut on other 2019 devices. Announced at the Surface event on October 2nd, the AI-driven feature shifts users’ eyes to look directly at the camera during a conference call.

Chief product officer Panos Panay talked up how the tech can increase the feeling of a connection between users. Rather than looking at the screen, the caller appears entirely focused on what the other is saying.

However, en entire world of intimate connections may have to wait on hardware. Speaking to VentureBeat, Microsoft confirmed that gaze correction isn’t truly viable on devices that don’t hold the Surface Pro X’s custom SQ1 chip.

Engineered with the aid of Qualcomm, it’s the first 3GHz ARM chip, holds 2 teraflops of GPU power, and, crucially, has a dedicated AI Engine. This will let the AI perform the correction with 50 times less power draw than a regular PC. It also means the feature doesn’t need to use the GPU at all to function.

The Future of Surface AI is Unknown

For now, those talking with a Surface Pro X user will see their adjusted eyes, but everyone else will have the same glassy gaze. The plan is to launch the device’s tech on Teams, and it’s not clear if it will come to other apps. iOS 13, of course, has similar functionality, engineered by Apple.

Still, it stands to reason that this won’t be the only Pro X-exclusive feature. Microsoft didn’t have much else to announce when it comes to the AI engine, but that’s bound to change. The applications of such hardware are still being explored and the Pro X is likely to have other exclusives after launch.

That raises questions about the company’s processor strategy going forward. It would be nice for the Surface line to be on the same page, and currently, that means a Qualcomm-powered chip. Meanwhile, the Surface Laptop 3 is the first to have the option of an Intel or AMD Ryzen processor. This is the most diversified hardware offering we’ve seen from Microsoft yet, and its future could very much depend on the applications of that AI chip and the offerings of Qualcomm’s competitors.