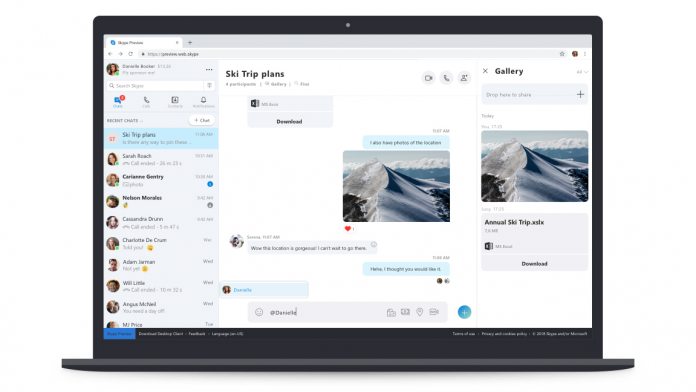 Microsoft has rolled out a major update for Skype that extends across all the platforms the communications service is available on. Version 8.52 is now available on Windows, Mac, Linux, Android, iOS, and the web.

With this release, Microsoft has finally brought a dark theme to Skype on Android and iOS. Previously, this theme was only available on desktop versions of the app. It is worth noting Skype syncs with system level dark mode. For example, if you set your Android smartphone on dark, Skype will mirror the setting.

Elsewhere on mobile, Skype has gained the call scheduling feature that arrived in preview earlier this month. Users could previously only schedule a call if it was going to be one on one. That limitation has been lifted and users can select multiple participants in a group and schedule when the call will be made.

Microsoft says the call scheduling feature is also available on Windows, Linux, Mac, and the web. Also from that preview build, the drag and drop ability for desktop versions is now generally available. Users can now drag and drop from a contact list directly into a conversation. This feature is limited to the Skype desktop app.

The latest Skype update is rolling out in stages, so if you haven’t received it yet you should in the coming hours or days.

In August, Microsoft sent out a more extensive update to Skype versions across form factors. Features such as message drafts, file previewing, message bookmarks, multiple photo/video views, and a split window were added.

When you type a message but not send it, Skype will now save it as a draft. The app would previously remove the message if you left the chat or closed Skype. Bookmarking is another interesting feature that will improve the message experience. You can now choose to bookmark any message by right-clicking (long press) and choosing “Add bookmark”.