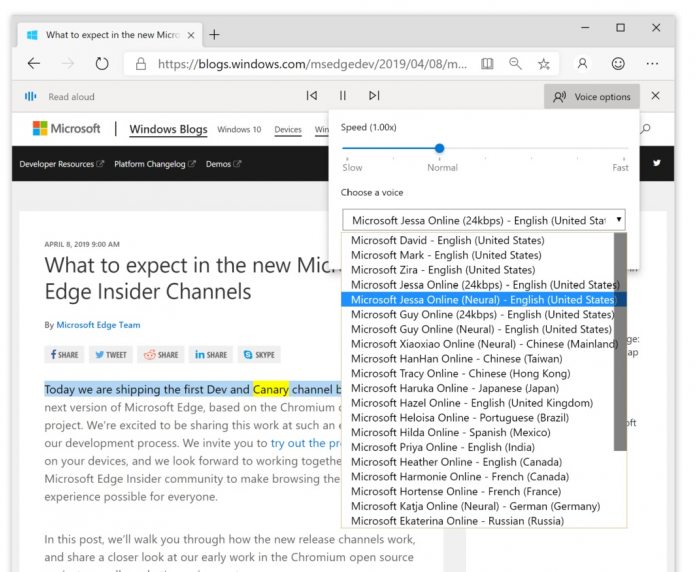 Microsoft has said it is going to make improvements to its Read Aloud feature for Chromium Edge web browser preview. This is the same feature the company also introduced on iOS earlier this week.

In a blog post, Microsoft said users have complained the read back voice is too robotic:

“A common theme that we heard from Read Aloud feedback in the current version of Microsoft Edge was that the default speaking voices sounded robotic and unnatural,” Microsoft’s Scott Low explains. “People also told us how time-consuming it was to install different language packs so that they could read text in other languages. We have made this experience better with the arrival of cloud-powered speaking voices in the preview builds of Microsoft Edge.”

New speaking voices are now available for Read Aloud on Chromium Edge. Microsoft has rolled out the improvement to the daily Canary builds and the weekly Dev channel builds. 24 new voices have been added from 21 locations.

Voices in Read Aloud are powered by Microsoft Cognitive Services. Microsoft has created standard and neural versions, with the neural voices being closest to natural voice.

If you want to test the new natural voices in Read Aloud on Chromium Edge, select text and choose “Read loud selection” from the right-click menu.

As mentioned, Microsoft rolled out Read Loud to Edge on Apple’s iPad and iPhone before. Read Aloud is an important new tool for several reasons. Of course, the main focus is on accessibility and allowing users with impairments to have a website read to them. Through this update, Microsoft Edge can read aloud the contents of any webpage.

Aside from accessibility benefits, Read Aloud can also be helpful when driving and wanting to avoid distraction. Equally, it is a useful tool for cooking or when consuming a longer article.