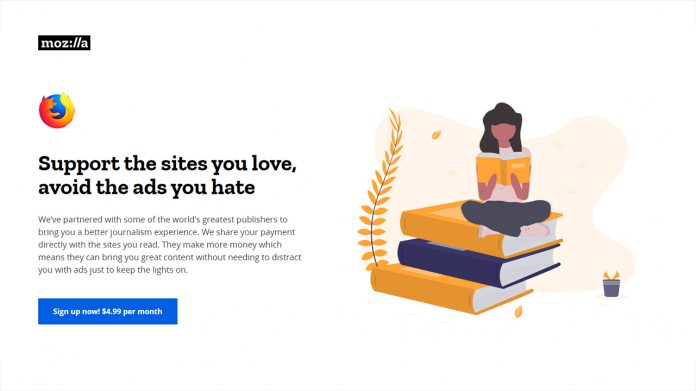 Mozilla is the latest company to attempt a replacement for ad-funded journalism. The Firefox-creator announced plans for a $4.99 subscription that would support publishers while removing ads from their site.

“No matter how you find an article, Mozilla’s ad-free experience is there. Whether you discover content in blogs or on apps like Twitter and Reddit, whether you’re on desktop or mobile, it just works—because who needs another thing to check in the morning,” reads a landing page for the service.

Naturally, proceeds from the service would go back to the publications the service supports. Mozilla is also promising audio versions of articles and bookmarks that sync across devices, as well as cross-device progress syncing for stories.

In its blog post, Mozilla claims that the online advertising ecosystem is broken, with revenue going to a handful of companies and users complaining about invasive trackers or pop-ups.

It can be incredibly difficult for new sites to make a profit when it comes to ad funding, while the click-based economy can reward timeliness and sensationalism over strong journalism. This has only been exacerbated by the introduction of ad blockers, which can cause companies to run more profitable, invasive ads as a result, creating a spiral.

Mozilla’s service will tap into Scroll, a currently invite-only service powered by partnerships with Vox, The Verge, Buzzfeed, Gizmodo, USA Today, and other big sites. It says this is one way it’s collaborating to “better understand consumer attitudes and interest towards an ad-free experience”.

The question of whether consumers will pay for this is obviously the most important here. After all, users can already get an ad-free experience by simply installing an extension. Dictation capabilities can already be found in some browsers, including Microsoft’s Chromium Edge. Mozilla could win users over by tying a lot of functionality into one service, but it seems unlikely at this point.

Mozilla’s product isn’t currently available. Instead, clicking the ‘Subscribe’ button in its landing page leads users to a survey about their interests.