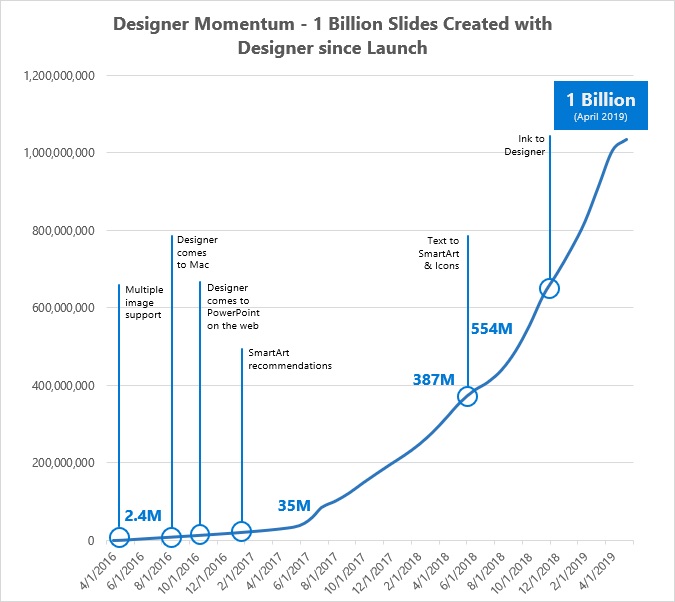 Microsoft is expanding the capabilities of its PowerPoint application in the Office suite. Specifically, the company is seeking to make the presentation app smarter through the Designer feature. Users can now place branded templates into presentations through PowerPoint Designer.

PowerPoint Designer was launched back in 2016 as a tool that gives suggestions to users about building slides. Those suggestions include improvements for text, adding icons, or integrating images. Since its launch, Microsoft says users have created over one billion slides using PowerPoint Designer.

To begin its push towards the new one billion, Microsoft says users can now add templates in Designer. Branded templates are among the biggest user requests on PowerPoint due to a need to comply with corporate branding rules.

Branded templates in PowerPoint are now available to the Office 365 Insider program on Windows 10 and Mac.

Microsoft also confirmed PowerPoint Designer is also receiving a feature called “perspectives”, which is another addition for slide. You may be familiar with perspectives if you are a Bing user. Microsoft has migrated the feature from its search engine, providing PowerPoint users with references for large number values.

Elsewhere in Designer, Microsoft has added Theme Ideas. This new feature shows recommendations of images and icons that work within certain themes. Photos are licensed for commercial use and are surfaced when a user starts to type text into a blank slide.

Microsoft says Theme Ideas is now available to PowerPoint users on Windows, Mac, and the web in Office 365.

The final new addition in PowerPoint is Presenter Coach, a tool that allows users to rehearse a presentation. During the rehearsal, the app will provide real-time suggestions about sentence pacing, word choices, and presentation techniques.