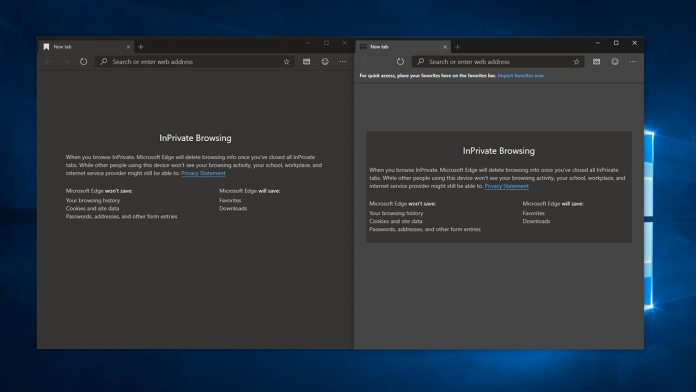 Microsoft has updated the Chromium Edge Canary to 76.9.146.0, bringing with it some changes to InPrivate browsing. The additions are mostly visual, with a clearer box around the tooltip, and a lighter gray for the main color.

Generally, the new design has more contrast and is a little more pleasing on the eyes, but sacrifices some of the darkness of the previous elements. Strangely, though, it differs more dramatically from the scheme of EdgeHTML.

According to MSPowerUser (via htnovo), tooltip text from InPrivate browsing has also been updated. We were unable to see the reported changes in our build, so it’s possible Microsoft is doing focused testing or this was simply a translation error.

Naturally, these changes are pretty small, but it’s worth noting that the Edge Canary got some more significant additions earlier in the week. v76.0.1440 debuted the highly awaited spell checker. This addition was highly awaited by many, who rely on spellchecking to catch errors in messages and documents.

The second feature has fewer bells and whistles but is quite useful. Progressive Web Apps (PWAs) now have a back button in the browser bar for navigation. This can be enabled via the edge://flags page in version 76.0.145.0.

Microsoft seems to have beaten Chrome to the market with this feature, which doesn’t have a comparable addition. It’s only really useful when app’s don’t have proper back button support on their own, but it’s appreciated all the same.

Progress on the Chromium version of Edge seems to be speeding along very quickly, with some major interest from consumers. Some of us at Winbuzzer have switched to it as our daily driver, seeing few reasons to use the slightly more bloated Chrome.