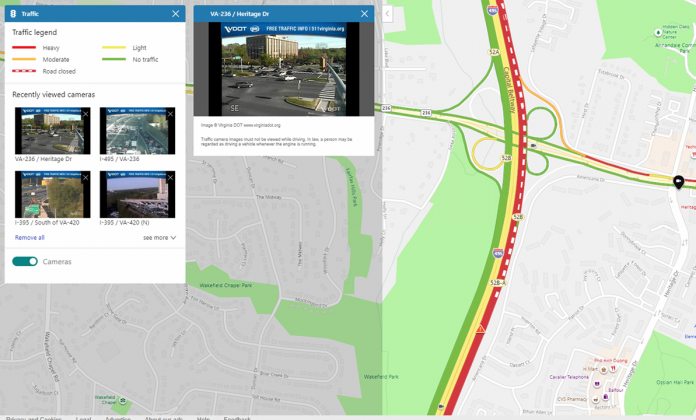 An update to Bing Maps enables the ability to view traffic cameras along a planned route. The addition follows improvements to colored traffic mapping last month, which made overlays more modular.

On its website, Bing warns that these images may not be checked by the driver while the engine is running. The pictures are sourced via local transport departments and as such camera coverage can vary.

U.S. Cities like Washington D.C., Los Angeles, San Fransico, and New York appear to be supported. In Europe, a quick check revealed cameras in London, Amsterdam, Berlin, and beyond.

To check cameras not along their route, users can visit the Traffic tab of Bing maps. Here they’ll also see their recently viewed cameras so they can check them periodically.

In general, this is a useful feature that saves visiting individual and often unintuitive websites. It’s worth noting that Google Maps does not appear to have the feature at this time.