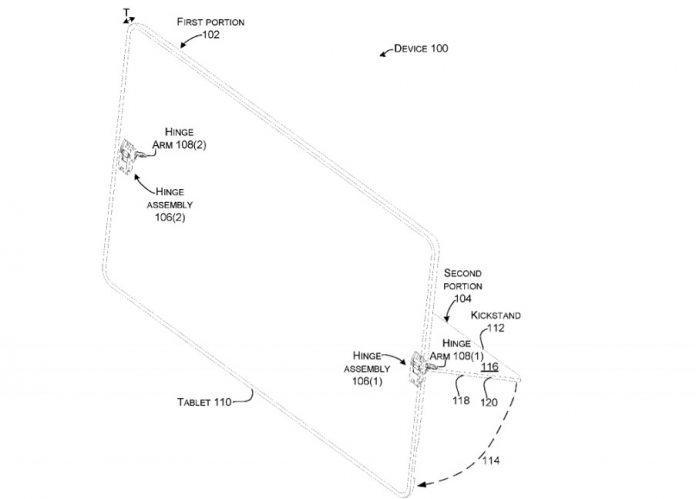 Microsoft is continuing to develop hardware updates for its Surface Pro hardware. A newly discovered Microsoft Patent shows the company is preparing a new kickstand mechanism. In the paper, the company describes how a new hinge for Surface products could be simplified and improved.

Windows Latest reports the patent details a new kickstand, which could be used on 2-in-1 devices or dual-screen hardware. As we know, Microsoft has been working on double screen and folding technology for some time.

The patent is titled “SECURED DEVICE PORTIONS” and was filed by Microsoft back in 2017. That means the company has been working on it for some time.

Among the details in the new Microsoft Patent include photos of a Surface Pro with a new kickstand mechanism. Microsoft points out the new hinge would allow an accompanying device to sit in different form factors.

While it seems Microsoft is testing this setup on a Surface Pro, the patent explains the kickstand will work on other dual-screen folding devices:

It seems as though Microsoft is trying to find a solution for a hinge mechanism on a folding Surface. Earlier this month, a Microsoft Patent titled ‘FRICTION HINGE WITH CLUTCH-BASED RESISTANCE’, the latest patent has some improvements in mind. Under the new design, it would be easier to close the kickstand, but harder to open it.