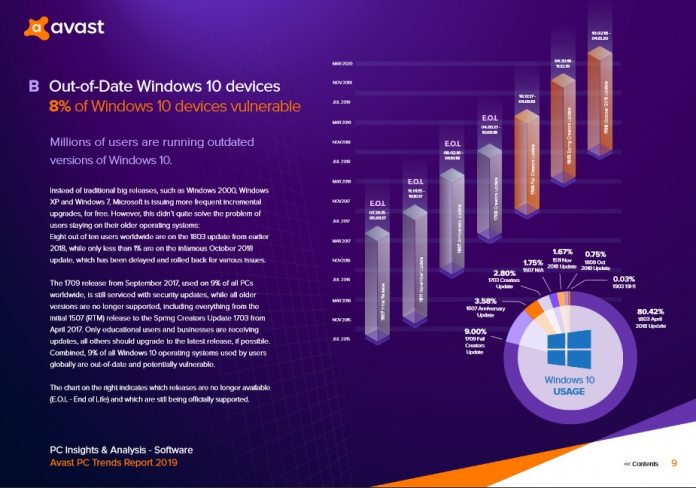 We are often told about the importance of security on Windows 10. For the most part, the OS is handled by Microsoft’s monthly patch cumulative updates. However, users are often overlooking applications and programs installed on their PC, which are not patched automatically. A survey has found millions of Windows users are not carrying out basic app maintenance.

Security company Avast conducted a survey covering 163 million PCs. The study finds 55 percent of all installed programs and apps were not the latest version of that service. In other words, 55 percent of all apps on Windows PCs are out-of-date and contain vulnerabilities.

Of course, an out-of-date app with known issues is much more susceptible to a successful attack. Avast says the most popular outdated app is VLC Media Player. Found on 32 percent of all PCs, only 6 percent are running the latest install, meaning 96 percent are on outdated versions.

Microsoft’s own Skype is also among the most outdated apps. Microsoft has been reorganizing the app structure of Skype, ending support for Windows 7, which may explain the situation.

Other apps mentioned by the firm include Adobe Air, Firefox, WinZip, iTunes, GOM Media Player, WinRAR Archiver, Java Runtime Environment 6-8, and others. So yes, basically some of the most important and popular PC apps and programs.

Windows 7 is a part of the problem. Microsoft’s decade old platform is still extremely popular, especially in enterprise, with an install base of 43 percent. That means many Windows users are running out-of-date programs on an out-of-date OS.

The problem may be solved partially on January 14, 2020, which is when Microsoft will end all support for Windows 7. Many people still on the OS, especially organizations, will be upgrading to Windows 10 throughout 2019.