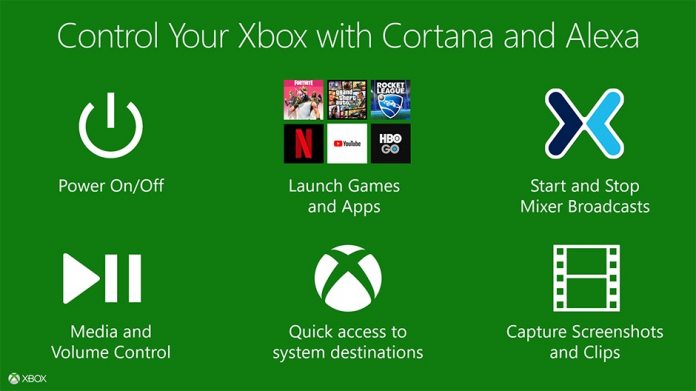 Microsoft and Amazon’s recent finalization of an integration between Cortana and Alexa is bearing fruits. The Xbox team has announced an expanded range of voice commands for the Xbox One. Users will now get more intelligence from Xbox Skill thanks to support from Cortana and Alexa.

Currently available to Xbox Insider Program members, the ability has been named Xbox Skill. The new Xbox One feature allows users to control much more of the console. Cortana and Alexa will take commands.

We guess each assistant will be better at some commands than the other? That’s the only reason we can see for using two voice assistants. Either way, Microsoft says an expanded range of commands are now available to gamers:

“With the Xbox Skill, you can use voice commands to power your Xbox One console, adjust volume, launch games and apps, start and stop broadcasts on Mixer, capture screenshots, and more. It’s the fastest way to get into your games and one of the easiest ways to interact with your console for everyday tasks.

For example, if you have the skill enabled on your Echo and you’re a part of the Insider preview, just say “Alexa, start Rocket League.” and this command will automatically turn on your console, sign you in, and launch your game.”

As mentioned, the Xbox Skill feature is limited to Xbox Insiders at the moment. Of course, it will roll out to all users eventually and can be used in the following ways:

Amazon and Microsoft finalized the Cortana and Alexa collaboration last month, a full year after the partnership was announced. Cortana can now be accessed on Amazon’s Echo devices, while Alexa will run on Windows 10 PCs and the Harmon Kardon Invoke speaker.