In a somewhat surprising move, Microsoft is axing its install limit for consumer versions of Office 365. Subscribers to Office 365 Home and Personal will be able to install it on as many devices as they wish.

The only caveat is that you’ll only be able to use five of those installs simultaneously. Otherwise, you’d be able to just buy one subscription and share it with everyone you know. Even so, it’s a huge upgrade, especially for Personal users, who previously had a limit of one PC and one tablet.

To ensure Home is still valuable, Microsoft is upping the number of licenses to 6 rather than 5. Users can share the subscriptions with other accounts, providing each with 1TB of OneDrive storage. Each user can sign into five devices at once for a total of 30 simultaneous connections.

Microsoft is also changing the way you manage Office 365 subscriptions. Users can now go to the Microsoft Account Portal instead of a dedicated Office page, streamlining the management experience. The Home subscription will also get integration with Microsoft’s family service, automatically sharing it with family members.

With these changes, Microsoft is being more generous to its users, but it’s also removing annoyances. Users won’t have to worry about de-registering one device before they can enable another. The device won’t be in use, so it won’t hamper any limits.

It also makes it easier to use Office for one-off purposes on random devices. Students can quickly sign into their account on a group member’s PC to get access to all of their documents and benefits.

This fits with the company’s general strategy, which is to let you pick up where you left off on any device. With the addition of Windows Timeline, you can now sign into your Microsoft Account on any PC to view your history. You can also send documents from your phone to desktop using the ‘Continue on PC’ function of Microsoft Launcher.

In all, it seems like a smart move from Microsoft that increases the value of its subscriptions. However, it’s unlikely one user will use Office on 5 devices at once, so there may be a rise in account sharing and other exploits.

For Microsoft, it’s a small price to pay to root out competition from G Suite and other free competitors. 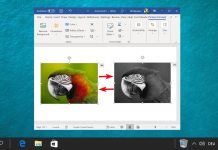 Microsoft Word: How to Convert an Image from Color to Black and White