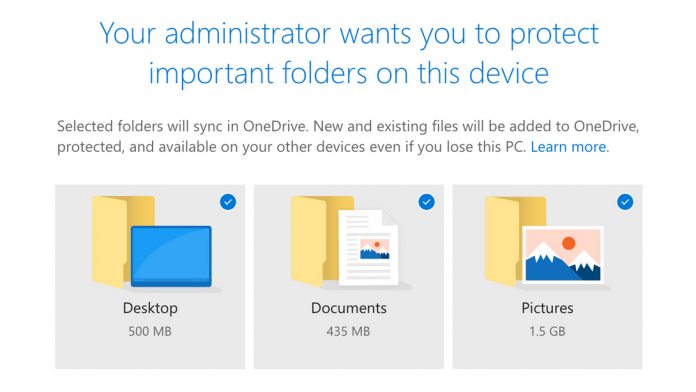 Microsoft is expanding the core abilities of its OneDrive cloud storage service. The company has added folder protection to the app, giving users more efficient syncing. It is worth noting that this new feature is limited to Windows 10 PC users on OneDrive.

With folder protection, OneDrive will automatically sync images, folders, and documents. This is important because the service backs up a Windows 10 PC without needing to do anything.

Some people use more than one PC, perhaps a personal and work machine. Now with OneDrive users can sync content automatically across machines. Using this feature, folders can also be synced across PCs.

Microsoft first detailed folder protection back in June. Back thin, the company called the feature “Known Folder Move”. We know from that first reveal that the feature is also available for OneDrive on Windows 8.1 and Windows 7.

Speaking to The Verge, a Microsoft spokesperson explained how the feature can maintain security and fluidity.

“This is a new feature we started rolling out broadly this week that is now available to OneDrive users with personal accounts,” the spokesperson said.

“It makes it easier to move content into OneDrive, have access to all your important files on all your devices, and keep more files protected with features like ransomware detection & recovery.”

Folder protection is not enabled by default. To use it, head to the settings menu on Windows 10 OneDrive and move to the Auto Save section. In the update folders button, the folder protection feature is available.

Remembers, once enabled the feature will automatically sync your chosen OneDrive folders. If you don’t want specific folders to be synced, you will have to manually remove them.