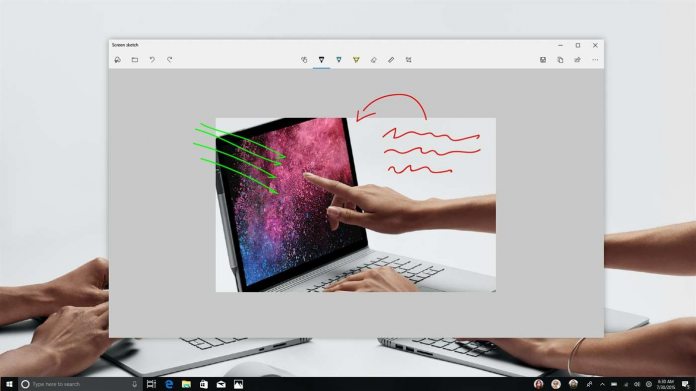 We already know Microsoft is working on replacing its Snipping Tool through Windows 10 Redstone 5. The replacement app will be called Screen Sketch and first landed on the Inside back in May. Today, the company is rolling out a new preview update for the tool adding some welcome improvements.

Through this release, Screen Sketch is updated to version 10.1806.1901.0. Essentially a screenshot tool, it is important that those shots are actually high quality. Through early previews of the app, the screenshots came out blurry… hardly a good look for a service designed to take screenshots.

Microsoft has returned to Screen Sketch with the Windows 10 Insider Preview build 17704. Now the app takes much sharper screenshots and has scored other general improvements. Snips are no longer lacking detail and look much cleaner.

If you are unfamiliar with Screen Sketch, it was originally created as an integration for Windows Ink. However, Microsoft decided to use the app to replace the current Windows 10 Snipping Tool. That service has been part of the Windows fabric since way back in Windows 7.

Screen Sketch will be more powerful than its predecessor. For example, it will have a locked in keyboard shortcut (Win+Shift+S) for easy access. Additional features include creating screenshots in random shapes and an in-built image editor.

While the app is available in the Microsoft Store, you will need to be part of the Windows Insider Program to use it.

Screen Sketch is interesting in its own right, although the app dropped some clues about Microsoft’s plans with the Windows 10 Control Center. An earlier preview build of the app showed a gear icon that leads to the Control Center.

The Windows 10 Control Center has been talked about since last year and is expected to arrive with Redstone 5. The center gives easier access to numerous settings without having to go into the actual Windows Settings app.