Microsoft’s resurgence under CEO Satya Nadella continues after the company posted blockbuster results in its fiscal year-end financials. In an earnings call, Microsoft announced it has crossed the $100 billion annual revenue amount for the first time.

It is worth noting that Microsoft runs its fiscal year from July to July. So, while this is the second quarter of 2018 in the general financial year, it is the company’s fourth quarter. Satya Nadella reported net income of $16.6 billion from record revenue of $110.4 billion over the last 12 months.

The numbers highlight the significant growth Microsoft has enjoyed under its CEO. Indeed, year-on-year growth sits at 14 percent in terms of revenue. Impressively, the company still made a hefty profit despite spending a generous $14.73 billion on research and development.

For its fiscal fourth quarter 2018, Microsoft bested analyst predictions once again. Clearly the mobile first, cloud first strategy trumpeted by Satya Nadella early in his tenure two years ago is paying off. 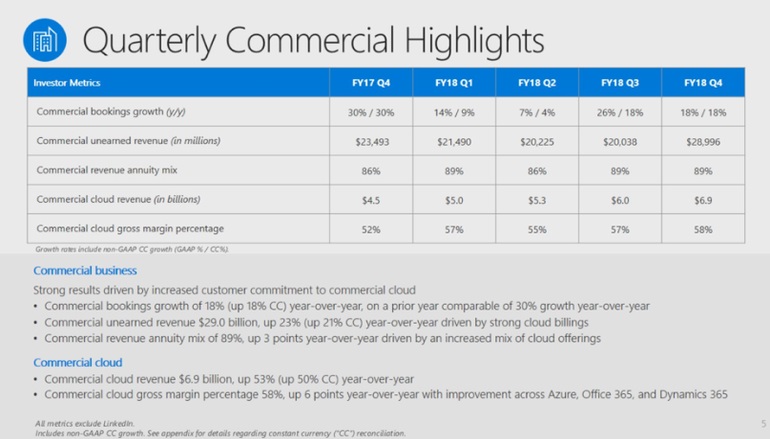 Commercial cloud continues to be the driver behind Microsoft’s renewed success. The division raked in $6.9 billion in revenue during the fiscal Q4, a 53 percent rise from 2017. During the last frame of its fiscal year, Microsoft reported net income of $8.9 billion and overall revenue of $30.1 billion. The latter figure is a handy 17 percent year-on-year jump.

Azure is still thriving and increased 89 percent compared to a year ago. The cloud platform may not really be denting Amazon’s cloud service provider market lead, but it hardly matters considering the blockbuster performance of Azure.

“Our early investments in the intelligent cloud and intelligent edge are paying off, and we will continue to expand our reach in large and growing markets with differentiated innovation,” the chief executive officer, Satya Nadella, said in a statement. 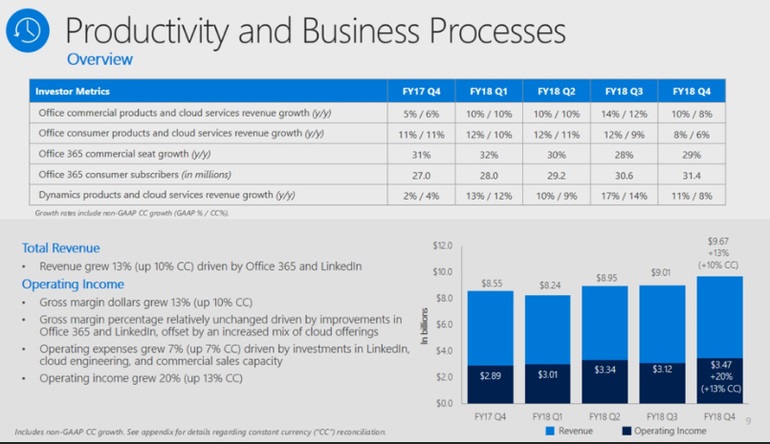 Last year, Microsoft acquired LinkedIn for $27 billion, a risky outlay not matter the business being bought. So far, the business social network has enjoyed being under Microsoft’s wing and saw revenue increase 47 percent in Q4. Over the 2018 frame, the network added revenue of $5 billion.

Surface was once the outlier of Microsoft. We all remember the disaster of the hardware brand’s early years, including writing off nearly $1 billion in inventory. Since then Surface growth has been solid, although 2017 saw static movement.

Last night, Satya Nadella announced Surface brought in $4.6 billion in revenue during the fiscal 2018. That means Surface is now very much a fully contributing division of Microsoft’s overall output. Indeed, the division grew an impressive 25% year-on-year. 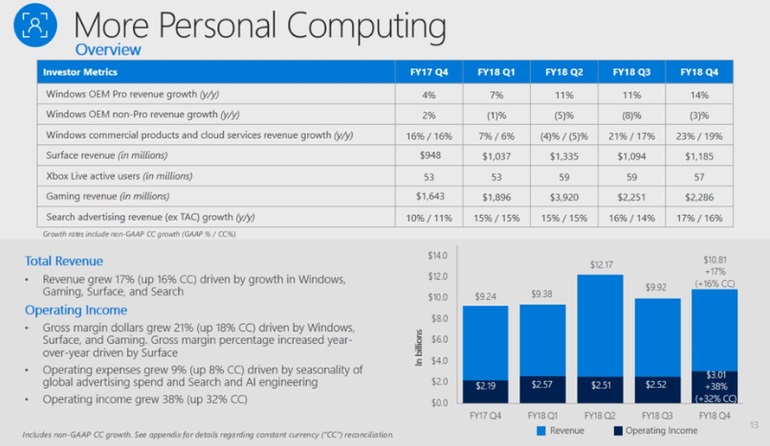 The same can be said for Xbox, which has also had its troubles. Microsoft’s gaming division accounted for $10 billion in year-long revenue.

Windows 10 Pro increased 14 percent during the fourth quarter. More businesses are clearly upgrading to the Win10 platform. Sure, Microsoft would have preferred this to happen sooner, but progress is progress. Still, the company has not year passed its goal of 700 million active devices running Windows 10.