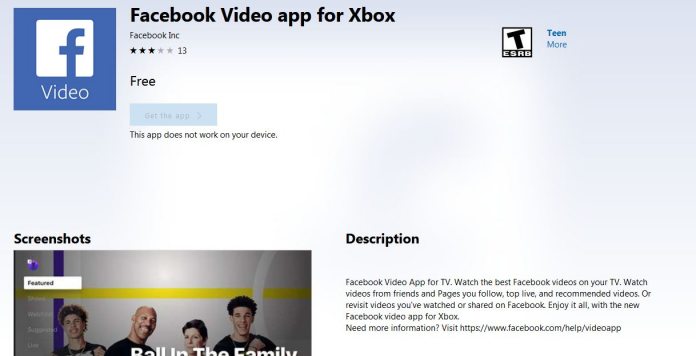 Xbox One users are getting some more streaming content after Facebook Video made its debut on the console. The availability of the streaming service comes over a year after Apple TV and Samsung TVs scored the integration.

With Facebook Video, users can search and browser video suggested by the social network. Live streams are also available, while it is possible to view your own videos through the app. The app is now available from the Microsoft Store on Xbox One. Users can access the content by signing into their Facebook account.

Through the Watch service, partners earn 55% of the advertising revenue. The service recommends personalized content and categories for browsing. It is worth noting that Facebook Watch is currently only available in the United States.

Watch your favorite Facebook shows on the big screen with the Facebook Video app for Xbox: https://t.co/7L7WrEzCKj pic.twitter.com/LIuokSMNIp

While Facebook Video is unlikely topple Netflix or YouTube, it is another bow in the cap for Xbox One streaming. The console now has a myriad of streaming options, including Spotify on the music front.

Microsoft will be pleased to see more services embrace Xbox, especially considering its own streaming services have crumbled. Last year, the company shuttered its Groove Music Streaming Pass and directed users towards Spotify.