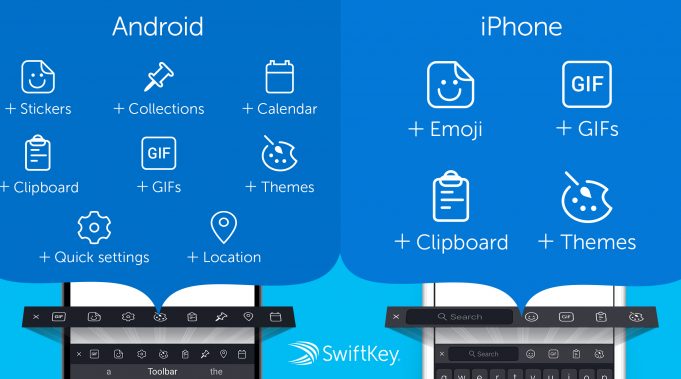 SwiftKey is rolling out one of its biggest updates ever, integrating a new toolbar with emoji’s, GIFs, clipboard pasting, and more. The change makes current features faster and easier to access, but new functionality is coming, too.

The toolbar will soon feature location sharing in the US and India, integrating with many apps to help others find you. Similarly, the calendar functionality will let you quickly insert appointments straight from your keyboard.

Though the update is available for both iOS and Android, user’s of Google’s OS will benefit from the most features. They’re able to create and insert stickers, access quick settings, and will get exclusive access to location and calendar.

Though this may be the most noticeable change since Microsoft’s acquisition, the claim that it’s the app’s biggest update may be unfounded. In 2016, the company integrated neural networks, greatly increasing the accuracy of the keyboard’s suggestions over time.

The behind-the-scenes change is one of the reasons SwiftKey stands so high above the competition, though admittedly it was available in test form via SwiftKey Neural Alpha before the acquisition.

However, in terms of competition, the addition could be huge. The GIF integration in Google’s GBoard has been drawing some users away from SwiftKey, and this should put Microsoft up there with other non-native keyboard apps.

When combined with recent quick paste, Outlook integration and emoji prediction, SwiftKey is looking like one of the best keyboard apps on Android.