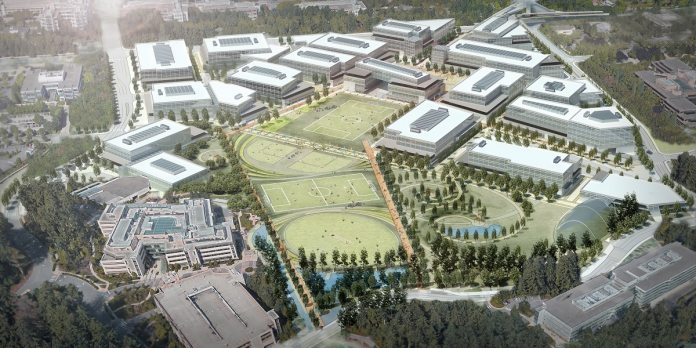 Competition between leading tech giants is always at breaking point. They all want the best products and solutions and the best innovations. However, companies like Microsoft, Apple, Google, and Amazon are not content with just competing in the market. Those particular giants also want to have the best headquarters.

Microsoft is the latest to join the race to create the most innovative campus. The company has announced it will “refresh” of its Redmond base. While the company will not be moving to a new location, that refresh is more like a complete overhaul.

The 500-acre campus in Washington has been Microsoft’s home for thirty years. Over the coming years, the company will begin a major redevelopment. This will include revamping existing buildings and adding 18 new structures to the complex. 6.7 million square feet will be overhauled, but Microsoft has not said how much the revamp will cost.

Judging by the scope of the changes and Microsoft plans, this is a multi-billion-dollar operation. Once the redevelopment is complete, Microsoft Redmond will house 131 buildings, up from 125. It will also allow the workforce to be increased from 47,000 to 55,000 at the campus.

Considering the significant moves rival companies have made in changing bases, it is about time Microsoft revamped its aging Redmond headquarters.

“As our employees create the tools and services of the future workspace for our customers, it’s important they have a campus that reflects that future for themselves,” says the Microsoft blog post. “Our new campus will be more open and less formal, divided into a series of “team neighborhoods” while capturing more natural light and fostering the type of creativity that will lead to ongoing innovation to advance the industry and benefit our customers.”

To smooth over the construction with locals, Microsoft says it will be creating 2,500 new jobs over the next five to seven years. There will also be a new Redmond Technology Transit Station and Link Light Rail connections when the new campus is opened in 2023.

“We are not only creating a world-class work environment to help retain and attract the best and brightest global talent,” the company wrote, “but also building a campus that our neighbors can enjoy, and that we can build in a fiscally smart way with low environmental impact.”

Microsoft is hoping its campus will be the standout amongst its rivals. However, the company faces some still competition, with most major tech giants currently developing new headquarters. Apple’s is among the most impressive, the Apple Park spaceship campus. It is a massive circular structure that has been shrouded in mystery and just a bit of controversy before opening this year.

Google is also now into development on a new 18.6-acre expansion of its Mountain View Campus. There will be a new 595,000 square-foot building added to the complex. Finally, Amazon is making a bold statement with its new Seattle base, which will be focused on being environmentally friendly.