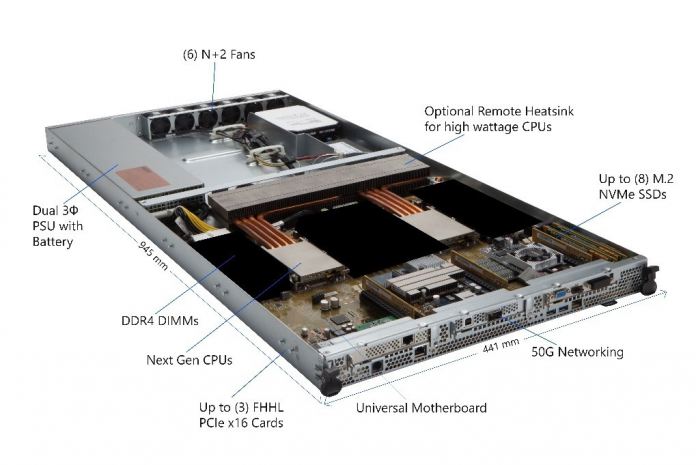 The project is Microsoft’s own hardware standard. It has been created to help bring down the cost of creating for cloud services, especially on Azure. Microsoft will share its hardware designs as open source, once they are 50% complete.

Announced at the Open Compute Project (OCP) annual summit in March, the new hyperscale cloud device design has been partnered with Intel from the start. Also in March, Microsoft announced support for NVIDIA and AMD processors.

Microsoft says Intel’s Xeon high-end silicon will be a “cornerstone” for Project Olympus:

“We designed Project Olympus with the ability to accommodate a variety of workloads from email to databases, online productivity, HPC, and even AI… Intel Xeon Scalable Processors enable such platform capabilities by providing the ability to scale resources as needed.”

Intel’s new Xeon series are designed specifically for enterprise and datacenter-grade customers. These are the highest spec’d chips the company has ever made for production. The Xeon 8180M is the flagship and comes with market busting specifications.

However, as we mentioned in our report earlier today, the flagship chip costs a massive $13,000. That is nearly double the price of its predecessor and $12,000 more than Intel’s leading consumer-oriented chip.