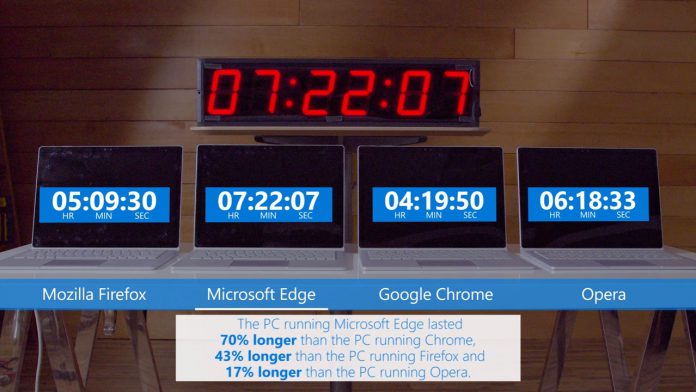 Microsoft freely admits that it was a risk to develop a new web browser from scratch. However, Microsoft Edge is coming along nicely, even if it is still behind main rival Google Chrome. One area where Edge has consistently been superior is in battery life. Naturally, Microsoft has been vocal about this, and the company is at it again.

Now that the Windows 10 Creators Update is out in the wild, Microsoft is showing how the feature update has improved battery efficiency in Edge.

If you have been following the Microsoft Edge battery life story, you will know the company has issued videos pitting the browser against rivals. In its latest test, Microsoft conducted the same test across Edge, Firefox, and Chrome.

The same hardware and conditions were used for all browsers. Microsoft set up a Surface Book with the Intel Core i5, 8GB of RAM, Intel HD Graphics 520, running with the Creators Update. Each of the browsers (Edge, Firefox, and Chrome), where then streaming video from Vimeo.

Microsoft points out that each device was configured to get the most from the battery. For example, Display settings were set to brightness at 75%. Location and Bluetooth were disabled, while the Quiet hours feature was turned on. Furthermore, updates were disabled and Windows Battery Saver was on.

Last year Microsoft fired shots at Chrome by showing how much better Edge is for conserving battery. Microsoft run a test to show the Edge browser has superior power efficiency compared to Chrome, Opera, and Firefox.

In response, Opera carried out its own test, saying Microsoft was not clear enough about the criteria of its test. The company was very clear about its settings and Opera promptly defeated Edge by a comfortable margin. However, in its honesty Opera showed that its browser was running the built-in ad-blocker while Edge was not.

A later independent test showed that Microsoft Edge defeated all browsers, including Opera in battery efficiency.