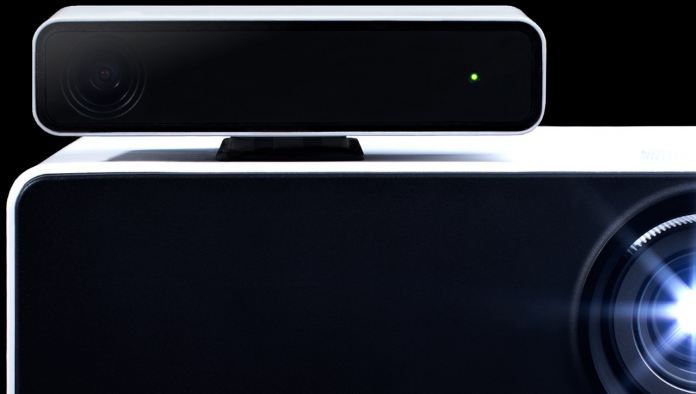 You may remember IllumiRoom from CES in 2013. It looked promising, but it was clear the project wouldn’t get a release in its current form. It was always intended as a proof-of-concept. A trial run, if you will, for something bigger.

That bigger product has now arrived, but it doesn’t come directly from Microsoft. Lightform is a collaboration between the former IllumiRoom research team and Bot & Dolly, the company behind the Box art project.

However, unlike IllumiRoom, Lightform is more than a TV entertainment system. The tiny computer intelligently maps your living room and projects images onto the objects there.

Co-founder Raj Sodhi says it’s part of a wider push to integrate technology into our existing lives. He calls it “the ubiquitous user interface”.

Sodhi worked on RoomAlive, another Microsoft research project with similar intentions. He’s joined by employees from Google, Adobe, and HP.

Lightform can create a high-res scan of a room in minutes, plugging into a projector via HDMI and outputting assets in seconds. According to Sodhi, the quality of that scan is very important.

“Having a high-resolution scan means that every projector pixel has a corresponding real world location,” he explained to Wired. It means Lightform can project pretty much anything, from a screen on a wall to a patterned cactus.

The effects can be controlled directly from your phone, tablet, or laptop. After the scan, users can create content to project via a simple interface.

Of course, no rooms remains static, and Sodhi has a solution for that too. Lightform scans the room periodically to check for any changes.

The next step for the company is making that projection respond to input in real-time. Lightform may soon be able to track objects and react to voice and gesture, replacing traditional screens.

In some ways, it’s an effort to stop us staring at phones and start interacting with the real world. Until then, the project will provide great visual effects for businesses and art installations.

Its first version will launch this summer, though the price point is not yet known. You can sign up for pre-order notifications on the official website.