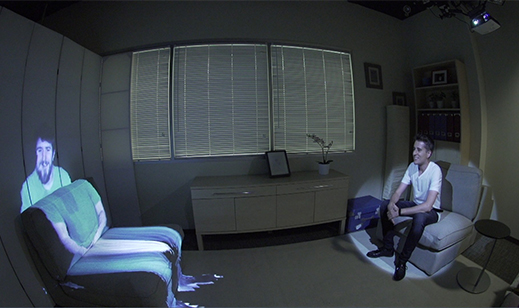 The project called Room2Room is using Kinect cameras and projectors to transfer the image of interlocutors as a life-size version to the other side.

Room2Room is a follow-up of Microsoft´s RoomAlive project, in which Kinect depth cameras and digital projectors were used to create a virtual gaming arena.

The same components are now applied in Room2Room, with live testing to determine whether holographic video calling can make the experience more immersive.

The capabilities of Room2Room are already being tested out by the researchers at Microsoft, where subjects had been chosen to participate in an experiment. The experiment required the subjects to make use of 3-D blocks to build different shapes, and the time required to build the shapes was observed.

Impressive, but work in progress

While the experiment does show that Room2Room could be the next big thing in augmented-reality and in VoIP services as well, it is far from being ready for mainstream consumers. Besides the bulky hardware required for hologram video projections, researchers have to resolve the problem of determining where the person being projected is looking.

While the Microsoft Hololens can be the ideal solution to display the projection of the person, it will need a fair amount of hardware upgrades to make hologram video calling a reality for the masses. There are no reports on whether Microsoft is planning to release the technology, and for now, its widespread usability seems to be implausible.