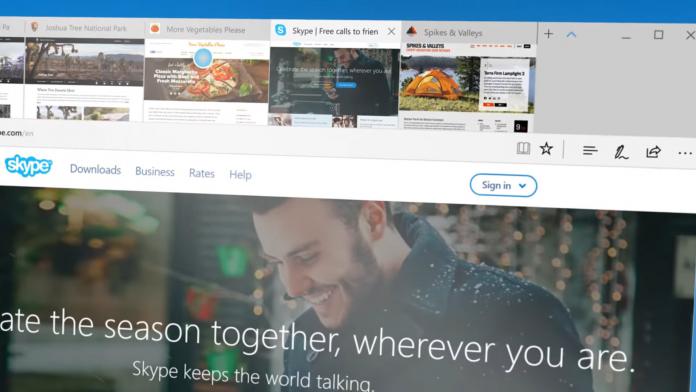 In the last several months, Microsoft has been insider-testing many Edge improvements that will all be included in the final version of the Windows 10 Creators Update.

A new drop-down tab preview with a scroll-able row of thumbnails, which Microsoft confirmed yesterday will surely be the most visible change for many users.

But tab-handling in general will get much easier, especially for those of us who tend to have many webpages open at the same time. Users can select and hide a group of active tabs to get a clean slate for new tasks and just restore them when needed again.

Edge will also get improved VR support for sites that rely on Mozilla´s WebVR API, which brings VR content into the browser and allows people using VR headsets to view VR content from the web.

Support for the WebRTC 1.0 API the H.264/AVC and VP8 video codecs for RTC will further enable plugin-free, interoperable video communications solutions across browsers and platforms. However, Microsoft has pointed out earlier that they don’t plan to further update the native WebRTC 1.0 API beyond this release as they want to focus on legacy interoperability.

E-Book reading on Microsoft Edge will also get much better with the Windows 10 Creators Update. Users then will be able to use custom font sizes, layouts, a theme navigation control  and Cortana. Microsoft started e-book sales in the US Windows Store last month. So far there is not much offer but we can expect more publishers to come onboard until the Windows 10 Creators Update is finally released.

Developers will benefit from over 30 percent more APIs in Edge in the Creators Update. Access to favorites, roaming data between PCs and cross-app data-handling are just some examples. Here Microsoft´s official video that summarizes the changes in about one minute.