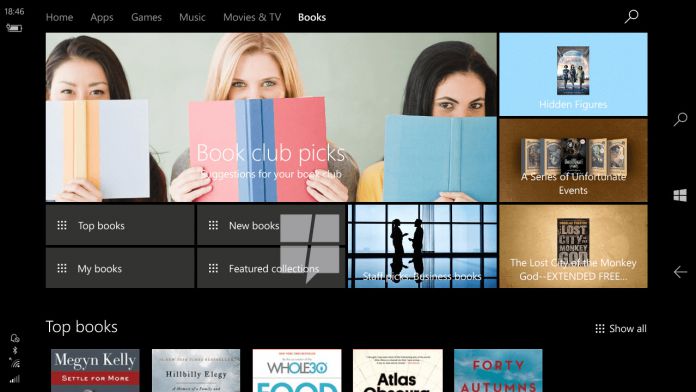 Microsoft is reportedly working on a new storefront for purchasing ebooks from the Windows Store. The new feature will be introduced with the Windows 10 Creators Update this spring. A report from MSPoweruser says the feature will be available for Windows 10 Mobile, as well as PC and tablet versions of the OS.

The idea of a ebook section of the Windows Store is not new. Microsoft has toyed with the concept for some time. One of the more intriguing aspects is potential support for Windows 10 PCs and the Microsoft Edge browser.

Of course, the idea of ebooks on mobile devices makes a lot of sense, but what about on PC? Are users reading ebooks on their laptops? Back in November, Microsoft brought EPUB support to the Edge browser for Creators Update preview builds.

This support allows users to read unprotected ebook files in the EPUB file format. Insider build 14971 introduced customization tools, such as the ability to change font size and themes. Users can also bookmark pages, access Cortana integration, and search for words and phrases.

The ability to buy ebooks from the Windows Store is the next step in Microsoft plans for a universal store. The company wants to unify storefronts into one place. Customers will have access to all their apps, games, movies, and other media. Clearly, ebooks will be added to that list in the coming months.

ZDNet reached out to Microsoft for comment on the ebook store, but got a typically vague response:

“Windows Insider Program was created to enable Microsoft to test different features and functionality which will influence future versions of Windows. We regularly test new features and changes to existing features to see what resonates well with our fans. Stay tuned for more information soon.”