Microsoft has cleared all its stock of the Lumia 950 and Lumia 950 XL smartphones. The Windows 10 Mobile flagships have been on a long road to extinction since the company left the mobile hardware market earlier in the year. The cleared inventory comes after Microsoft slashed the prices of the 950 and 950 XL thought its official store.

While Microsoft has not confirmed officially, this is likely to be the last stock the company stores. Of course, customers can still get the Lumia 950 XL from the AT&T website for $298.99. Microsoft appears to be stocking the Lumia 640 XL, although it is currently unavailable. That’s the same story for the Verizon Lumia 735. 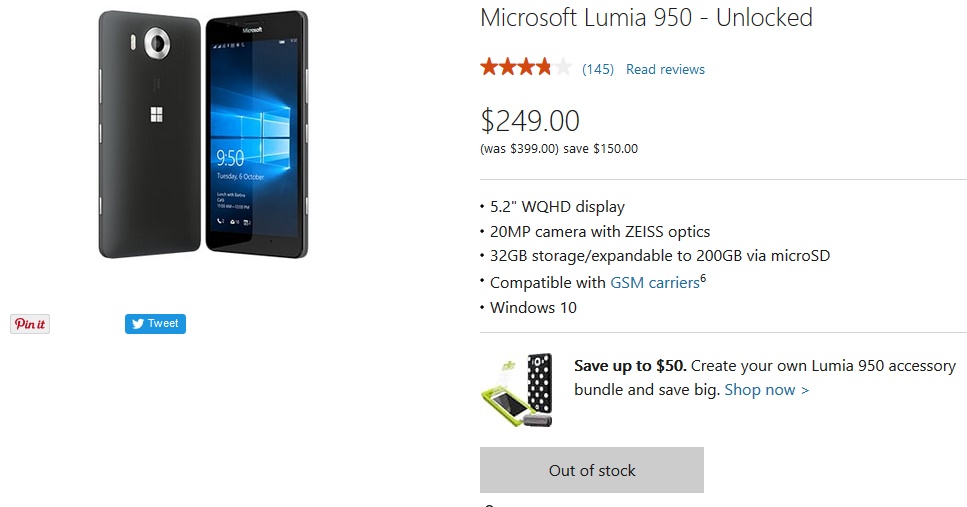 In the United States, the Microsoft Store is still selling the Lumia 550 and 650. As the weeks and months pass, expect all Lumia devices to disappear from Microsoft’s official channels.

Retailers will likely have stock left beyond that, but it is clear time is running out for Windows 10 Mobile hardware from Microsoft.

Microsoft has been selling the Lumia 950 and Lumia 950 XL for $249 and $299 respectively. This was a huge saving for two quality handsets and represented an enticing deal for Christmas.

Unfortunately for the company, the Lumia 950 devices never caught on with consumers. Their lack of market traction wasn’t helped by a lack of deep carrier support. The failure of these handsets ultimately put the Lumia as a brand out to pasture.

While they divided opinion, both smartphones are still a good bet if you can find them with a reduced price.

The end of stock for Microsoft’s flagships in the US mirrors recent events in the UK and Germany. Earlier in the month, we reported that all Lumia inventory has been sold in the United Kingdom. Again, this is from Microsoft’s official store, with retailers still offering the devices. Back in September, the Lumia 950 sold out in Germany.